City
Capital of Ferelden (during the Orlesian occupation)

The City of Amaranthine is the center of the Arling of Amaranthine on the coast of the Waking Sea. It is located north of Denerim and connected via the Pilgrim's Path.

The City of Amaranthine also attracts many pilgrims from all over Thedas. This city is where Maferath assembled his armies to invade the Tevinter Imperium and where Andraste first revealed the Chant of Light.

Outside of Ferelden, the City of Amaranthine is now synonymous with the arling herself, but before the Orlesian invasion, it was only a modest fishing village despite a deep port well-suited to commerce. At that time, few other kingdoms had any need to trade with the Fereldan "barbarians".

The city changed rapidly with the Orlesians came. They built temporary docks to accommodate ships packed with chevaliers, and for a time, Amaranthine was the capital of occupied Ferelden. The bann of Amaranthine became one of the wealthiest nobles in the kingdom, as goods like wool were leeched from the city's swollen ports.

During the liberation, the fleeing Orlesians looted the city but left it otherwise unscarred. She recovered quickly. Ironically, Amaranthine's current prosperity is the legacy of Orlesian occupation. Do not share that opinion with the locals, mind.

—From Annals of Northern Ferelden, By Brother Bedine, Chantry scholar
—From Codex entry: The Port City of Amaranthine

Chantry of Our Lady Redeemer

The Crown and Lion

Last of the Legion

The Assault on Amaranthine

Keep Out of Reach of Children

Chantry of our Lady Redeemer[]

A Donation of Injury Kits

A Donation of Poultices

Preying on the Weak

From the Living Wood

Till Death Do Us Part

The Sermons of Justinia II

Moonshine for the Children

A Present for Melisse

Bell Collar - source: found among Homer's Toys under some trees to the left after entering the city.

Discarded Journal - source: a crate in the first building to the right after entering the city.

Potted Plant - source: found near the Chanter's Board.

Codex entry: The Crown and Lion 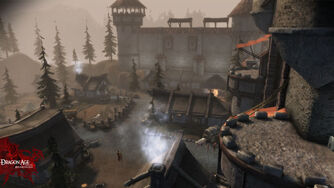 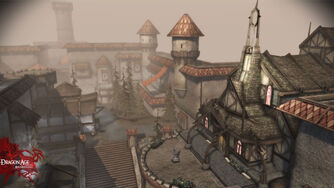 The Chantry of our Lady Redeemer
Community content is available under CC-BY-SA unless otherwise noted.
Advertisement