watch 02:39
The Loop (Games)
Do you like this video?
“I once dreamed of seeing places like this.”

Cillian is a player-controlled protagonist in Dragon Age: Inquisition's multiplayer.

Cillian was a child of the Ralaferin clan, like his clan mate Neria. When his magical abilities surfaced, he began training as Keeper Elindra's apprentice and was intended to be her First. But the tales of an ancient order of mystical warriors who turned their magic inward fascinated Cillian, and what he learned from Elindra could not satisfy his curiosity.

As a young man, Cillian decided that he would pursue the way of the arcane warrior. He asked Elindra's blessing to leave to seek his own path. She assented knowing his heart was not in becoming Keeper, and Cillian left his clan, traveling far into the wilderness, seeking out knowledge of the arcane warriors. He explored ruin after ruin until he came across an ancient elven shrine, where he says the secrets of the ancient order were kept. Cillian remained in the shrine for years, meditating, dedicating his mind, body, and soul to the practice of the art form.

Originally driven by the need to seek glory for his people, Cillian's years of meditation and solitude gave him wisdom and respect for all life. When The Breach opened, he knew his duty was to stand against it, fighting to save all he knows and loves.

Cillian is described as peaceful and laughs little by the Katari.

Cillian is involved in various war table operations. He can also sometimes be seen on the battlements at Skyhold with two other agents, near where Cullen is stationed. He can't be spoken to however.

Cillian in Heroes of Dragon Age 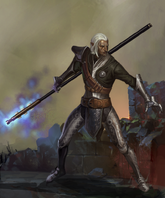 Retrieved from "https://dragonage.fandom.com/wiki/Cillian?oldid=874464"
Community content is available under CC-BY-SA unless otherwise noted.