Edit
watch 02:05
Wiki Targeted (Games)
Do you like this video?
Play Sound
“Honor does not preclude tactics, and glory is not won through foolishness.”

The chevaliers are an elite military Orlesian organization. Only nobles can serve in their ranks. They are addressed as either Chevalier or Dame.

Many of the nobility in Orlais are members of its famous/infamous knightly order, the chevaliers. Joining the chevaliers is a good way to improve social standing, a useful path for lesser, landless nobles and noble children not in line to inherit. The chevaliers include both men and women, although women are not often encouraged to take up arms. Those who do follow in the footsteps of the first female knight, Aveline. They are often posted as the Champion of the Emperor or Empress of Orlais.

The legendary training of the chevaliers at the Academie des Chevaliers in Val Royeaux is harsh, instilling in its knights a fierce discipline and code of honor that surpasses even value in their own lives. The chevaliers are said to be fearless and their loyalty to the empire absolute. The penalty for dishonor is death, something a chevalier should welcome if they have failed the order.

Chevaliers hold absolute power over those of commoner rank. The brutality of certain members of the chevaliers is infamous, and considering that the knighthood is above legal reproach, the lower Orlesian classes fear the knighthood as much as those of higher standing adore it. Indeed, chevalier privilege often leads to abuses against the common classes. The poor and powerless must tread carefully in the wake of such license or risk great danger to themselves and their loved ones.[1]

One of the main predecessors of the chevaliers was the Empress' Arm, an elite guard created by Empress Jeaneve I.[2]

Chevalier training is brutal and effective, and involves relentless training and honing of one's strength and skill. In addition to the history of the order, students learn proper form and breath control, and how to exercise their muscles to keep them limber as well as ascertain strength in a wounded limb, keep limbs from going numb from being bound, and even fight off the effects of magic or drugs.[3] Chevaliers are also taught to identify different types of pain, by way of determining life-threatening injuries.[4] Chevaliers began training from a very young age. Gaspard de Chalons[5] and Michel de Chevin began their instruction when they were only thirteen years old.[6]

Exercises at the Academie include fully-armored endurance training such as tree-climbing followed by melee training with weighted weapons. [7] One of their most grueling tests of skill includes sparring with moving, bladed pells. Students also learn horsemanship and how to care for their warhorses.[8]

Melee training provides a student with tremendous prowess in light and heavy armors and in all forms of melee and horse combat, including two-hander weapons and sword-and-shield, and the use of a longsword and shortsword or dagger in tandem as well.[8] Additionally, though chevaliers prefer to fight in armor, they are quite capable and resourceful without it, as well as against opponents – like the lightly armed duelists of Rivain and Antiva – who may eschew armor all together.[9] Additionally, chevaliers also learn some of how templars battle mages, how Grey Wardens combat darkspawn, and how to slay the undead.[10]

Honor is paramount to a chevalier, to the point that one may defend the life of a hated foe to prevent their dishonorable death. Torture of an opponent, or condoning torture, is also prohibited.[11] It does not, however, preclude tactics and a certain opportunism.[12] Indeed, a chevalier will likely make note of an any defects or nicks in an opponent's weapons or armor and seek to exploit them.[13]

The on-foot fighting style of the chevalier is tailored to the situation, and involves a multitude of forms given the enemy and type of weapon at hand. A few include:

Duels are extremely serious affairs for chevaliers. Though enchanted items may be used, outside magical aid is frowned upon in favor of a test of skill to the death. This is often used to settle arguments or provide "satisfaction" to a party's sullied honor in public situations.[18]

Traditionally, chevaliers salute one another with the phrase "Death before dishonor" before they begin fighting.[19]

A Chevalier in Dragon Age II 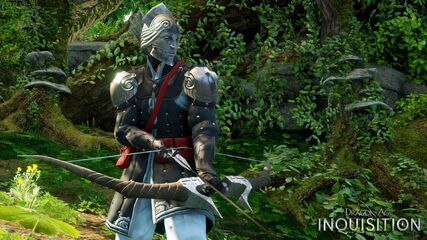 A Chevalier with a bow & arrow in Dragon Age: Inquisition

Tier progression of a Chevalier in Heroes of Dragon Age 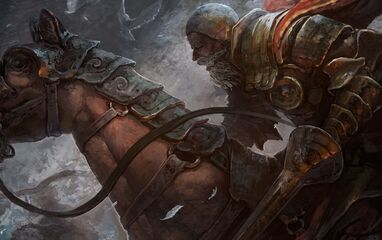 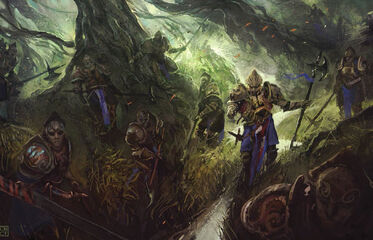 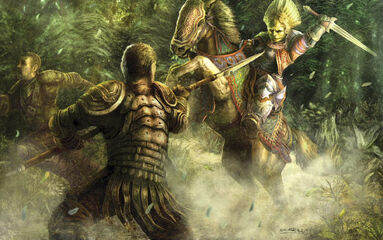 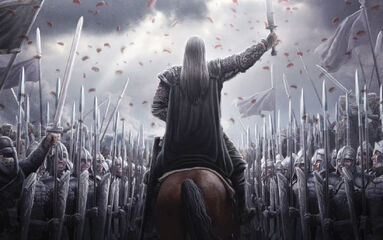