The Chasind Wilders are a human tribe dating back to ancient times.

The Chasind mostly keep to themselves contemporarily. Years of separation from the Alamarri sharing Ferelden Valley with them: the Avvar, Clayne, and modern Fereldans, has led them to develop their own and unique culture, including their own language, though they are capable of conversing in the King's tongue.

While the Chasind have waged war on both the Tevinters and on the inhabitants of Ferelden in the past, today they are a largely peaceful people, although they are still viewed as primitive and barbaric by the people of Ferelden. They try their best to live out decent, if misunderstood, lives in the Wilds, painting their faces and banding together in small communities led by shamans.[4] Despite this, they face many raids from templars,[14] and persecution from Fereldans.[15]

There are many tales of these shamans having learned their magic from the "Witches of the Wilds", witches that inspire as much terror as they do awe and gratitude even if there is no definitive proof they exist. In particular, the tale of Flemeth, the greatest witch of the wilds, is celebrated amongst all tribes.[4]

Chasind live out their lives in small villages made up of houses and strange-looking huts built on stilts, or even into the great treetops of the Korcari Wilds. Some Chasind are even said to eke out an existence in the frozen wastes that await beyond the Wilds, and to this day the Ferelden eye the south warily, regarding the Chasind with suspicion and hatred and fear the day a charismatic figure will unite them once again.[4][16][17]

Chasind respect those with survival skills in the Wilds,[18] and have designed a system of leaving behind hidden markers and signs in piles of stone and rubble. In this way, they mark trails, note places of interest, and even give warnings in a way outsiders cannot understand. Interestingly, these markers look indistinguishable from a regular pile of stones.[19]

Much of Chasind culture is a mystery, but they are known for their animistic beliefs, their tendency towards superstition and that they do believe in the presence of gods of some kind. In particular they believe that some men or women are beloved of the gods, and some of their weapons have thus been shaped into the likeness of animals; the theory being that, upon a Chasind slaying someone with said weapon, the gods would be confused and might blame the animal that the weapon is modelled after instead.[20]

Traditionally, the Chasind personify the seasons as female warriors, bearing the typical attributes of renewal and death. Winter is of note for its brutality, as it is tied to their rumored custom of killing those who flee battle. Old statues of these warriors depict women with animal heads.[21]

Other Chasind weapons, like their bows, also tend to bear strange markings and symbols,[22] often inspired by nature.[23] Chasind are also known for their brawn, as many of their weapons require great strength to be used effectively in battle.[24] However, one of their most valued weapons are the flatblades, swords that are only given to the most prominent of their warriors. Indeed, none but a few of their shamans know of how to craft such a weapon.[25]

Chasind works of art seem primitive at best; pendants and charms carved from the fangs, bones or claws of animals seem to be the most common,[26][27] alongside fertility carvings.[28] Likewise, their clothing is perhaps of questionable quality, sometimes merely pieced together from ragged strips of leather and adorned with the teeth and bones of animals and smelling strongly of tanned hides and sweat.[29] Even their helmets are often designed more for intimidation, rather than protection.[30]

However, Chasind are not ignorant when it comes to crafting. For example, the Chasind have found ways to induce hallucinations through extracts of the leaves of Deathroot,[31] and their skill in Herbalism further allowed them to create the ice salves to protect themselves from the cold winters of the Wilds.[32][33] They are also known to brew mead.[34]

Some Chasind do not raid and kill out of necessity, however... some deliberately inflict slow and painful deaths on their victims, seemingly out of cruelty.[35] Indeed, some Chasind are reputedly so barbaric that they even consume the flesh of the dead.[36]

The Chasind also produce an alcohol called Wildwine, which is not actually a wine but a grain alcohol made from ryott, a protein-rich crop valued throughout Ferelden, traded to them from southern villages.[37] Wildwine is much stronger than beer and is a favored beverage among the Chasind.[38]

While most Chasind do tend to live peaceful lives, there are some among them that favor bloodshed. Hardened by the harsh conditions of the Wilds that do not suffer fools lightly, the primitive nature of the Wilders do incline some tribes to take by force or stealth anything they cannot grow or build for themselves - which is to say, almost everything worth having. Chasind raiders, known within Ferelden as “stalkers,” often slip out of the wilds traveling in small scavenging parties to search for easy targets amidst the freeholds of the south. The Wilders are famed (and cursed about) for their stealth and hunting skills, both of which they employ to track down suitable targets. They favor vicious ambushes using short bows with wickedly hooked arrows. Stalker groups are invariably small, to deflect attention, and likely to be lightly armored in patchwork leather, so as to move with speed.[39]

South of the Korcari Wilds, there are so-called Sunless Lands.[40] The Chasind consider these lands to be dangerous and forbidden. The region is largely inhospitable as it spends most of the year covered in snow. However, the Sunless Lands are inhabited by people who are called "Agadi" by the Chasind, which means "exile" in their language. Genitivi theorizes that the Agadi have been expelled from the Korcari Wilds and splintered off into their own culture.[41] 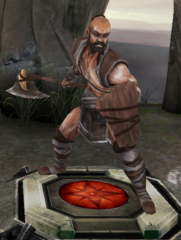 A Chasind warrior in Heroes of Dragon Age 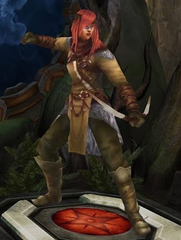 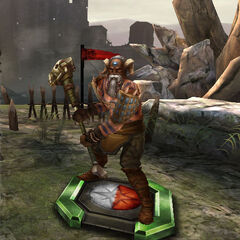 A Chasind General in Heroes of Dragon Age 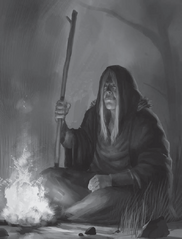