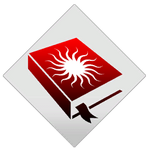 Chantry Historian is an achievement in Dragon Age II. It is obtained when you find four of Brother Genitivi's written papers, across all three acts of the game. To gain the achievement, you must find them in a single game. Though relatively easy to obtain, the third one is very tricky.

(Note): If you want to keep count of the chapters you have go to journal then select lore.

Once you obtain all four of the chapters, you will earn the achievement "Chantry Historian".