The Chantry is the dominant religious organization in Thedas. It is based on the Chant of Light, a series of teachings written by Andraste, the prophet of the Maker, and was founded by Kordillus Drakon, the first emperor of Orlais. The Chantry's followers are known as Andrastians. "Chantric" is also an acceptable adjective to refer to something or someone that is of the Chantry religion.

The Chantry's goal is to spread the Chant of Light to all four corners of the world and to all races. The view of the Chantry on non-humans is that they need saving—they have turned even further from the Maker's grace than humanity has. There are no known Andrastian Qunari. The elves worshipped, and in some cases still worship, the Elven pantheon, and dwarves venerate the Stone. Once all peoples have accepted the Chant and practice its teachings, the Maker will return and restore the world to its former glory. As such, Andrastian religion in Thedas can be described as deistic in that the Maker abandoned the world, and he will not heed prayer or perform any other function until his favor is regained.

A cult known as the Cult of the Maker grew out of the legend of Andraste's martrydom.[2] The cult had no central leadership[3] and its followers were oppressed.[4] The clerics had to hide their lore from Tevinter magisters by way of ciphers and encoded scrolls.[5] In -130 Ancient, cult practitioners organized Andraste's teachings into hymns, creating the Chant of Light and the cult popularity spread.[6]

The cult remained fragmented until it was formalized into the Chantry by Kordillus Drakon, the first Emperor of the newly formed Orlesian Empire, in -3 Ancient. Drakon established Andrastianism as the national religion and was himself a fervent believer in the Maker. Three years later the first Divine, Justinia I, was declared. Drakon's military successes during the Second Blight significantly expanded the borders of Orlais, and soon after, the conquered lands converted to the faith. While these lands would later liberate themselves from Orlesian rule following Drakon's death, the Chantry's practice remained.

The Antivan Crows started as an arm of the Chantry. In the hills north of Treviso, an order of monks used the herbs grown in the gardens of their abbey to oppose the rule of a despotic duke in the only manner the monks could.[7]

With so much influence over the people, the Chantry can exert considerable political pressure on the ruling classes in many areas of concern. In extraordinary times, and in deference to Andraste, the Divine may also be moved to declare an Exalted March. These religious crusades have mobilized armies of thousands to destroy the heretical enemies of the Maker. The first March after Andraste's death was against the elves of the Dales.[10] The next four were against Tevinter, and the most recent was against the Qunari. Tevinter also took part in the latest march.[11]

With the start of Mage-Templar War in 9:40 Dragon, the Chantry lost control over the Circles of Magi, Templar Order and the Seekers of Truth.

At a later stage of the Mage-Templar War, the head of the Chantry and the head of the Mage's faction met at the Temple of Sacred Ashes for peace talks. There, a massive explosion occurred, creating The Breach in the sky and ushering in a rash of Veil Tears throughout the area. The Chantry was, until the Breach, "the thing keeping the lid on the pot of Thedas."[12] After The Breach, Chantry leadership succumbed to chaos.[13] 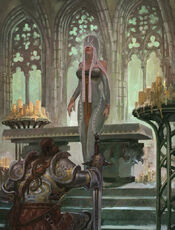 The actual priesthood of the Chantry is made up entirely of women, on the basis that Andraste was a woman. At the head of the Chantry is the Divine, who leads from her seat in the Grand Cathedral of Val Royeaux. Below her are the Grand Clerics who are the Chantry's highest authority in a country or a region. After a Divine dies, Grand Clerics are required to travel to Val Royeaux for the Grand Consensus, a meeting where Chantry leadership unanimously elect the new leader of the Chantry. Beneath the Grand Clerics are the mothers, who are responsible for administering to the spiritual well-being of their flock. If a mother is in charge of a local Chantry, she is called a Revered Mother. Beneath mothers are the brothers and sisters, consisting of three main groups: affirmed, initiates, and clerics. Brother is the only rank that men are allowed to have. The initiates take vows and receive an academic education. Those who seek to become templars receive a martial education in addition. Clerics are the scholars of the Chantry and the most senior of them receive the title of "elder," which is, however, beneath that of mother.

The funeral rites of the Chantry involve cremation. As Andraste's body was burned, and her spirit ascended to stand by the Throne of the Maker, so too will the spirits of her followers. The practice of cremation may also be to ward off the possibility of the corpse becoming the subject of demonic possession.

The pyres of peasants are often small and ringed with stones. Such burnings occur within the settlement, despite the fire risk, rather than at a distance.[14]

The Chantry hosts a Ten Year Gathering, in which pilgrims journey to the Grand Cathedral in Val Royeaux to pray for peace.[15]

The sun represents the fundamental goal of the Chantry: if all lands under the sun raise their voices in the Chant, then the Maker's eye will turn back to his Children.[16]

Retrieved from "https://dragonage.fandom.com/wiki/Chantry?oldid=613629"
Community content is available under CC-BY-SA unless otherwise noted.