“Some of us know what honor and loyalty are.”

Ser
Commander of the army of Gwaren

Origins:
Tower of Ishal
Rescue the Queen
The Landsmeet
The Darkspawn Chronicles:
Storm the Gates
Kill the Arl

As a youth working on her father's farm, Cauthrien became aware of a man on horseback being chased by bandits. After helping him fight them off, she found out that he was Loghain Mac Tir, the hero of River Dane. Cauthrien volunteered her service to Loghain, working her way up through the ranks with hard work and determination to become his lieutenant, a position in which she takes great pride.

Cauthrien is on the battlefield following the lighting of the beacon on the Tower of Ishal at Ostagar. Loghain tells her to order a retreat. Cauthrien tries to protest at first, but reluctantly gives in and orders the troops to pull out.

Once the Landsmeet has been convened, she will join Loghain and Rendon Howe to confront Arl Eamon as well as Alistair and the Warden at the Arl of Redcliffe's Estate in Denerim. Later, Cauthrien will confront the party when attempting to leave the Arl of Denerim's Estate - Interior and try to apprehend them for the death of Arl Howe. The Warden can either surrender or fight her.

If Cauthrien survives the encounter, she will be met again at the Royal Palace outside the Landsmeet Chamber. She will attempt to stop the Warden from interfering with Loghain and it is possible to fight her for a second time. However, the Warden can also persuade her to stand down peacefully.

Ser Cauthrien is encountered during the quest, Kill the Arl as an enemy boss. She is at the Denerim City Gates, leading Arl Howe's bodyguards. Cauthrien is slain along with her comrades by the Hurlock Vanguard and the Darkspawn. 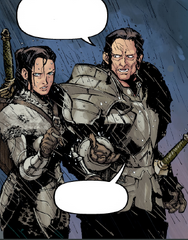 Tier evolution of Ser Cauthrien in Heroes of Dragon Age