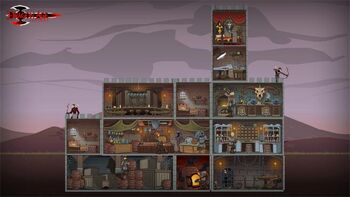 In addition to customizing your hero like in any other RPG, Dragon Age Legends also gives each player a castle from which they can produce items to aid them in questing. Upgrades to the castle require gold which is received from questing or when friends use your hero in battle. Below is a list of the rooms with their upgrade costs.

Worker room provide more workers so that players can produce more items at a time. They take up 1 expansion space. Worker rooms are non-upgradeable but the cost of each additional worker room increases. Placement of worker rooms affects their happiness which affects their productivity (time taken to produce items). Worker Rooms gain +1 happiness for wall (left or right) that is not adjacent to an Expansion room or below ground (max +2). Worker Rooms gain +1 happiness for each Tavern Level that is adjacent. It appears that the max happiness of a worker room is +10 (as April 16, 2011 using the Festival Potion (2x Happiness for 24 h) resulted in the game displaying the graphics for 10 Happiness but not the expected 16 Happiness. The game displays only the graphics for 10 Productivity but the Alchemy Lab, Apothecary, and Infirmary function with above 10 Productivity even though the graphics do not display such.)

The alchemy lab is used to create bombs, costs 800g, and takes up 2 expansions. At base lvl, it has 2 workstations and can create only Shard Bombs. Upgrading it can unlock a wide variety of bombs or increase the productivity of the Alchemy Lab. Crown upgrading the Alchemy Lab will give it a 3rd workstation.

The infirmary is where kits are produced. They cost 400g and take up 1 expansion. At base level they only have 1 workstation and can only produce regular Injury Kits. They can be upgraded to either unlock more kits or increase its productivity. Crown upgrading the Infirmary will add a 2nd workstation.

The storehouse is used to increase your hero's inventory by 4 spaces at base level. It costs 600g, takes up 3 expansions, and must be placed underground. You'll probably be needing one of these before you reach lvl 10. Upgrading it increases your hero's inventory up to a maximum of 21. Crown upgrading it will allow you to bring an additional item of each type into battle (6 instead of 5). These accumulate, so it is possible to stack potions if one has many storehouses with crown upgrades.

The throne room allows you to unlock different rooms for your castle. It takes up 3 expansions and costs 2000g. The description doesn't mention it, but the Throne Room must also be placed above ground. The last update has added another room. There are now only 2 rooms left that can't be unlocked. The rooms that can be unlocked are in the Throne Room are the Treasury, Practice Room, Furnace, Dragon Roost, Tavern, Kennel, Great Hall, Morrigan Room, Shale Room Library, Training Room and the new Chantry. Crown upgrading the Throne Room will allow you to increase the width of your castle by 1 expansion.

The great hall expands your guild. The Great Hall gives you automatically 4 more slots when bought, then 1 more per upgrade. Must be placed above ground. Crown upgrade gives a 10% reduction of the countdown of guild members. It takes up a block of 3*2 expansion spaces

The treasury lets a worker gather gold from one's friends. The time needed depends on how much gold they have put together, but it gets faster with every upgrade. Crown upgrade gives a 10% increase on the gold gathered. It takes up 2 expansion spaces.

The kennel gives you a mabari war hound you can bring into battle. It takes up 1 expansion space. Upgrading(gold or crown) will increase the war hound's statistics.

This practice room entices Isabela to bring her dual blades to your cause. It takes up 3 expansion spaces. Upgrading (gold or crown) will increase Isabela's statistics.

Dragons need a lot of space. Giving one space in your castle may not be wise, but will let you bring one in battle. It takes up a block of 3*2 expansion spaces. Upgrading(gold or crown) will increase the Fire Drake's statistics.

This room allows Morrigan, a Witch of the Wilds, to stay with you. It takes up 2 expansion spaces.

Shale is at peace in this room. Build it to add the rock golem to your party. It takes up a block of 2*2 expansion spaces.

The library doesn't allow you to gain more mana and skill points anymore. Instead it has the same function as the Training Room and the Chantry. This mean that the Library will allow you to unlocks new skills. For warriors this is Vangaurd, mages get the Arcane skill end rogues will unlock the Assassin skill. It takes up 3 expansion spaces. It takes up a block of 2*2 expansion spaces.

The Training Room unlocks new skills. For warriors this is Beserker, mages get the Elemental skill end rogues will unlock the Dualist skill. It takes up 3 expansion spaces.

The Training Room unlocks new skills. For warriors this is Templar, mages get the Spirit skill end rogues will unlock the Bard skill. It takes up a block of 2*2 expansion spaces.

Retrieved from "https://dragonage.fandom.com/wiki/Castle?oldid=543687"
Community content is available under CC-BY-SA unless otherwise noted.