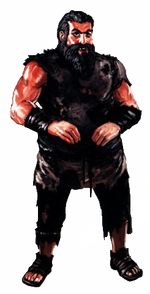 Born with no rights, the casteless are raised without any formal education and are considered non-people. They often make a living as thugs for the Carta, beggars, street sweepers, nug breeders[1] or noble hunters, among many other menial tasks, as the Assembly of Orzammar decreed during the reign of King Darbir since it insults the Ancestors for casteless dwarves to carry out any work that a dwarf of recognized caste can perform.[2]

Casteless dwarves are branded soon after birth with a tattoo to identify them. This also applies to surfacers who return to Orzammar in order to conduct business.[3][4] These unfortunates are believed to be descendants of criminals and other undesirables and have therefore been viewed as rejected by the Ancestors since Orzammar's foundation.

Technically all surface dwarves are considered to be casteless as well. However this matters only if they ever return to Orzammar. In those cases even the casteless dwarves of Orzammar look down on surfacers because they possess no stone sense unlike their underground kin.[5]

The Carta is a powerful and ancient[6] dwarven crime syndicate headquartered in Dust Town in Orzammar. Once headed by Beraht, it has since passed through the hands of his lieutenants Jarvia and Karshol.

Retrieved from "https://dragonage.fandom.com/wiki/Casteless?oldid=862231"
Community content is available under CC-BY-SA unless otherwise noted.