After his father died, Carver started down a military path and took part in the Battle of Ostagar, serving in the "third company under Captain Varel" according to Aveline. His fellow soldiers said Carver fought well, that they used him as a spear while they kept the darkspawn off his flanks. He had to be dragged from the fight when Loghain Mac Tir's betrayal forced the Fereldan army into a rout.[2] Carver returned to his family though they had to flee once the darkspawn attacked Lothering.

Carver has one of several facial structures, depending on which preset the player picks for their Hawke during character creation. The same applies for Bethany, Leandra and Gamlen.[3]

Carver spends a year working with his elder sibling to repay their passage into Kirkwall. Carver is particularly bitter once in the Free Marches city. He feels no real connection to the city and believes Leandra is trying to force a past on the family that she had long left behind. Furthermore, part of Carver resents being overlooked and having to give up opportunities in order to protect his mage sibling from scrutiny. Even so, Carver cares deeply for his family and works for their welfare in Kirkwall. Carver and Hawke plan on joining The Deep Roads Expedition, in the hopes that enough wealth and influence will keep the templars from Hawke. As Hawke gathers money to pay for the Deep Roads expedition, Carver gradually comes to see why people fear magic. Having grown up surrounded by magic, Carver did not see it as something to fear (though he never truly understood it either) until he witnessed the darker side of it from Kirkwall's blood mages. He eventually shows more sympathy toward templars, particularly after learning he was named after the templar who freed Malcolm Hawke from the Circle of Magi. After amassing the fifty sovereigns needed to fund the expedition, Carver volunteers to join his elder sibling in the Deep Roads venture. His mother however, begs him to remain at home. Carver protests, but the final decision is made by Hawke.

During the Kirkwall Rebellion in 9:37 Dragon, Carver supports the templars who are tasked by Knight-Commander Meredith to annul the Circle of Magi. In a last attempt to make Hawke join the templars, he asks if the Champion will fight their brother, giving Hawke the option of responding that Carver has been itching to fight them for a long time. Hawke can also ask him if he's willing to fight his sibling as well, to which Carver responds that it isn't what he wants and begins to express doubts. Meredith reminds him of his duty as a templar. If the Champion sided with the templars, Carver expresses surprise that it was the Templar Order which brought the siblings closer together. When the Champion goes to confront Meredith, Carver and Cullen side with Hawke—Carver stating that he will not murder his sibling for her. Carver may help out Hawke during the conflict. He automatically joins his sibling if Hawke does not have a full party. 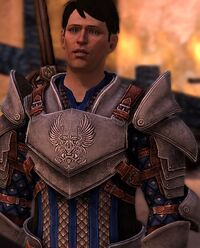 During the First Battle of Kirkwall, Carver appears as a Grey Warden passing through Lowtown with Stroud or Alistair and other Wardens. If Hawke tells Carver about the death of their mother, he tells Hawke that he already heard the news and he's sure that they did their best for her. However, he cannot join Hawke to save the city from the Qunari.

During the Kirkwall Rebellion in 9:37 Dragon, a Grey Warden Carver seeks out Hawke and ask them to let him fight by their side, thanking his sibling for saving his life. Carver is now content with his life as a Grey Warden and believes his actions can make the world a better place. He thinks he can start making a difference by aiding his sibling deal with the crisis at hand. When asked about how his role as a Warden could allow him to intervene when Grey Wardens are supposed to be neutral, Carver replies that Hawke saved his life and gave his life meaning by making him a Grey Warden; he won't thank his sibling by doing nothing while they start a war. If Hawke sided with the templars, Carver expresses surprise that Hawke, who is a mage, is helping Meredith annull the Circle.

Carver Hawke Alive and Well:
In the DLC Legacy, a deranged sect of the Carta tries to kidnap Carver due to his link to "the blood of the Hawke". Carver can travel with Hawke to a secret Warden prison in the Vimmark Mountains in order to find the source of the aggression and uncover the harsh truth about the Hawke lineage.

Carver became a Templar:
Varric states that he is still in Kirkwall, helping the Kirkwall City Guard keep order. A conversation with Hawke reveals that they sent their associate Aveline Vallen to take him far away from the Free Marches when they heard about templars acting strangely.

Carver became a Grey Warden:
Varric states that he was last seen on warden business near the border of the Anderfels. A conversation with Hawke reveals that they sent their associate Aveline Vallen to take him far away from Orlais when they heard about Grey Wardens acting strangely.

If Varric is in the active party he will allude to Carver's fate during the side quest Keeping the Darkspawn Down. He discloses that he knows someone who was afflicted by the Blight and in turn became a Grey Warden to avoid death, forcing them to fight darkspawn for the rest of their days. However if Carver died in the Deep Roads, Varric will mention this instead.

Fereldan Girded Plating – in the Estate Vault during the Birthright quest. +(10%) armor

Amulet of the Enthusiast – requires Mark of the Assassin

A Letter For Carver (conditional)

A Message from Lothering (conditional) 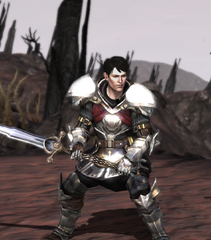 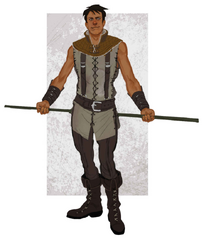 Concept art of Carver from Dragon Age: The World of Thedas Volume 2 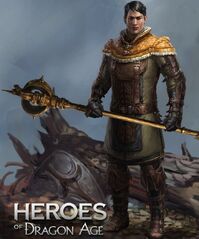 Artwork of Carver from Heroes of Dragon Age

Artwork of Carver's tier progression in Heroes of Dragon Age

Tier progression of Templar Carver in Heroes of Dragon Age