watch 03:03
The Loop (Games)
Do you like this video?
“If you seek the Anvil, then you must care about my story or be doomed to relive it.”

Caridin is a revered Paragon of the dwarves, who created the Anvil of the Void around -255 Ancient (940 TE). As a Paragon, he founded the noble House Caridin.

Caridin was born during the First Blight when the surface world was ravaged by the darkspawn, his mother was a noblewoman of House Ortan and his father Smith caste worker. As per dwarven tradition, the male child inherits the caste of his father so Caridin became a smith. But his mother fought to keep him close, and devised a plan in which both father and son could serve House Ortan officially as smiths. Caridin proved from a young age his smithing talent and he often employed creative techniques in his work. A few years later he had taken most of his father's commissions and was entrusted with outfitting House Ortan's finest warriors, many of whom were also his close friends.[1]

As more of the Deep Roads fell to the darkspawn, the dwarves became ever more desperate to push them back from their dwindling cities. Caridin envisioned a solution, based on a years-old idea, one that would turn the tide of battle in the dwarves' favor. The smith sequestered himself to his workshop, where he spent years refining his plans. When he finally emerged, he presented what he had made to the Assembly; the Anvil of the Void. Marrying the disciplines of smithing and lyrium enchantment, the Anvil allowed Caridin to create golems. In -255 Ancient, Caridin made the world's first golem[2], and for his achievement, he was declared a living Paragon by the Assembly and given his own noble house.[3] Following his ascendance, Caridin went on to design a stronghold for the Legion of the Dead, which was named Bownammar.

The golems allowed the dwarves to not only hold their ground against the darkspawn but push them back. Many victories were won against the darkspawn. But in -248 Ancient[4], after six years of constant output, Caridin and the Anvil vanished, and with them, the process of golem manufacture.

The dwarves mounted numerous expeditions to find the Anvil, but the darkspawn pushed them each time. One major operation was conducted during the second year of the reign of Queen Getha, not long after Caridin's disappearance. She sent the entire Legion of Steel, a total of 126 golems, but none of the golems returned. Due to the incalculable loss of the Legion of Steel, Queen Getha was deposed, and the Shaperate declared Caridin dead, extinguishing the dwarves' last kindle of hope of reclaiming their fallen empire.[5]

Caridin never mentioned the cost of such victory; namely the sacrifice of the lives of those who volunteered in order to animate the golems. He produced golems until King Valtor started using the Anvil to turn casteless, criminals, and political enemies into golems, instead of just volunteers.[6] Caridin objected, and in turn, was made into a golem himself. However, his apprentices knew not how to properly construct a control rod, allowing Caridin to retain his free will and mind. Caridin disappeared into the Deep Roads, taking his followers and the Anvil with him.[7] No one knew what became of Caridin until thousands of years later.

Shayle of House Cadash was the only woman who volunteered to become a golem. She was very loyal to Caridin and supported him against King Valtor. At some point however Caridin sent her away, "out of mercy".

This section contains spoilers for:
Golems of Amgarrak.
The smiths of Amgarrak sought to replicate and augment Caridin's work, but one of their creations turned against them, forcing them to seal the thaig and let it sink into obscurity for the safety of others. The Warden seeks to unravel the mysteries of Amgarrak in collaboration with members of House Dace.

He is involved with the quest, A Paragon of Her Kind, in which the Warden can decide to either aid him or Branka. If the Warden decides to aid him, he will forge a crown for the new king of Orzammar, telling the Warden to give it to the candidate of their choice. He does not show interest on who is the candidate nor wants to hear about today's world events as he believes that he does not belong in this age.

Once this is done, the Warden destroys the Anvil and Caridin throws itself into the river of lava feeling that his purpose has been fulfilled. If the Warden elects to not destroy the Anvil, Caridin will attack the party and is killed during the battle.

If Caridin eventually fights the Warden, it will be assisted by two normal stone golems and two elite stone golems as well, while Branka will be unable to assist. If Shale is in the party at the time, it will also turn hostile. As allies, the Warden has two normal stone golems. During the course of the battle, it is imperative that a party member is sent to collect every lyrium vein in the area as soon as possible, otherwise Caridin can use these to heal itself. 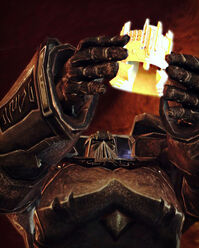 Caridin looking over the crown 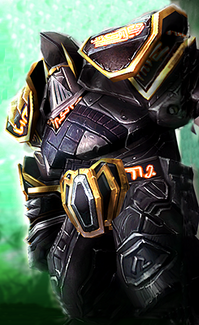 Codex entry: The Legion of Steel

Retrieved from "https://dragonage.fandom.com/wiki/Caridin?oldid=814456"
Community content is available under CC-BY-SA unless otherwise noted.