“I cannot wait for that glorious moment! The Grey Wardens battle beside the king of Ferelden to stem the tide of evil!”

Joining the Grey Wardens
After the Joining
Tower of Ishal

Cailan Theirin (born 9:05 Dragon), son of King Maric Theirin and Queen Rowan Guerrin, became the King of Ferelden after the sudden disappearance of his father in 9:25 Dragon. During the opening stages of the Fifth Blight in 9:30, he has been sitting on the throne for five years, alongside his wife Queen Anora Mac Tir, daughter of the hero Loghain Mac Tir.

Cailan was born in the year 9:05 Dragon. His mother showed great interest in books, and Cailan inherited this. He loved hearing heroic tales as a child, particularly those describing his father's rise to power. His mother, Rowan, died when he was still a boy in 9:08 Dragon, and the young prince lived a lonely childhood.

However, at some point he became aware that Alistair was King Maric's bastard son, and thus his half-brother. Even though they only ever met once as children, Cailan stayed informed about his life and knew enough about Alistair to give Anora a sense of his personality.

Cailan was not raised by his father alone. Loghain helped raise him and helped to organize his marriage to Anora, as they grew up together. He was described at that time as always following her lead, and being thoroughly under her thumb. While Anora eventually grew fond of Cailan's charms, he was not above committing a few indiscretions with other women during their marriage. Cailan never found himself heavily involved in Ferelden's politics, and seemed satisfied about Anora dealing with the administrative aspects of government, as in his mind, a true king's duty was to unite his people against a common enemy.

While some people thought of Cailan as foolish and a child playing at being a king, Cailan was also seen as a moral and idealistic king, willing to make alliances with former enemies for the good of Ferelden. He was also close to his men, as he would occasionally hang around and talk to them. In addition, he insisted that he fight alongside his forces and the Grey Wardens during the Battle of Ostagar, despite the great danger this would put him in. Cailan is more intelligent than he appears, however, and was even in talks with Empress Celene to forge a permanent alliance between Fereldan and Orlais.[2]

Rather than being concerned at the increasing number of darkspawn, Cailan embraced it as a chance to forge a legend of his own, by fighting alongside the legendary Grey Wardens at Ostagar. He was so determined to emerge victorious that he invited Orlesian soldiers to Ferelden, despite the fact that the nation had only been free from their rule for thirty years.

Past victories over the darkspawn has made Cailan over-confident to the point where Cailan begins to doubt if Ferelden is even facing a real Blight. Teyrn Loghain Mac Tir seems to believe that Cailan relies too heavily on the Grey Wardens and think them untrustworthy. Some think King Cailan has a delusional fixation with the Grey Wardens and their legendary reputation; and even Warden-Commander Duncan admits that Cailan believes fighting with the few Fereldan Grey Wardens makes Cailan feel invulnerable. Loghain also deplores Cailan's idea of joining forces with Orlesian reinforcements, which are en route; Loghain calls the idea a "fool notion" and also a threat to Ferelden's independence. Since Loghain won't permit them to wait for Orlesian reinforcements, Cailan insists that they defend Ostagar with the forces they have at hand.

Gossip from one of King Cailan's guards claims that Cailan has been spending most of his time riding off with the Fereldan Grey Wardens. Teyrn Loghain tries to get Cailan to focus on planning the coming battles but those discussions end up in arguments and the king just waves Loghain off. The guard claims that King Cailan wants to end the Blight with a single huge battle that will be remembered for centuries while Loghain felt Cailan was being too reckless. Even Duncan has voiced concerns of the possibility of the Archdemon appearing at the battle but Cailan puts him in his place, reminding him that is what the Grey Wardens are for. Loghain and Cailan have also had arguments about Queen Anora but the reason for it is never explained.

When the battle of Ostagar began, Cailan insisted on fighting on the front-lines, ignoring advice to the contrary. When Loghain pulled his troops from the battlefield; Cailan, most of his army, and nearly all of the Grey Wardens were massacred by the darkspawn. Cailan was ultimately killed by an ogre, despite the Grey Warden Duncan's best efforts to save him.

In the Return to Ostagar DLC, Cailan's body is found in an almost crucified position with many wounds and without his armor on the same bridge that the Warden and Alistair crossed to reach the Tower of Ishal. Once all of his equipment is found the Warden may return to his body and give him a proper send-off by burning his body on a pyre, leaving him to the wolves, or leaving his body to the darkspawn.

According to Cailan's honour guard, Elric Maraigne, Cailan was well aware that the darkspawn were too many and that there would be no victory at the Battle of Ostagar despite his bravado. Nevertheless, Cailan knew that he would likely perish in the battle and entrusted Elric to deliver the key to his royal arms chest to the Grey Wardens in the event of his death. Aside from Maric's Blade, the royal arms chest also contains Secret Correspondence documents that implicate Cailan's plans for Orlais and his marriage.

In Ostagar, the Warden can find letters to Cailan from Empress Celene of Orlais and from Arl Eamon, indicating that Cailan may have been planning to leave Anora to marry Celene instead. 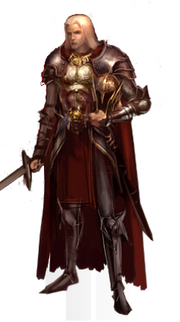 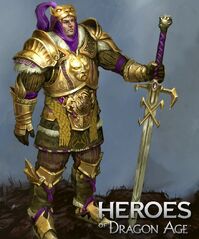 Cailan in Heroes of Dragon Age