The Castle of Caer Oswin is the seat of Bann Loren, a pious Fereldan noble who is little loved for his fickle allegiance.

I worry about Loren daily. Ever since the death of his wife and son in Highever at the onset of the Blight, he retreats further and further into reclusion.

Almost no one is permitted to come to Caer Oswin. The last time I managed to see him, it was only because I bullied my way into the castle and insisted his strange new guards take me to him. And I say "strange new guards" for a reason: almost all the Oswin retainers have been sent away. These men didn't wear Bann Loren's colors, and they struck me more as prison wardens than as protectors. Loren himself was pale and almost delirious. I begged him to see a physic, and he promised he would, but I doubt he ever did.

The guards ushered me out in a hurry, and the last time I returned, I was not even allowed past the gate. It's been months since anyone saw Loren at all. I fear the worst has happened, yet I can prove nothing. All I can do is pray the rest of the Bannorn take notice and act before a good man is lost.

This section contains spoilers for:
Dragon Age: Inquisition.
In 9:41 Dragon, a cult known as the Order of Fiery Promise overthrows Bann Loren and seizes Caer Oswin as their new headquarters. With the aid of the Lord Seeker, Lucius Corin, the cult lures members of the Seekers of Truth one by one and ambushes them at Caer Oswin so they cannot interfere with the conflict with Corypheus.

Seeker Shield - looted from a chest in the upper Living Quarters. 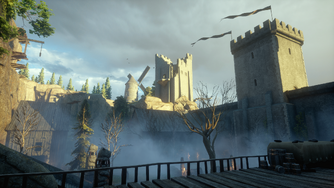 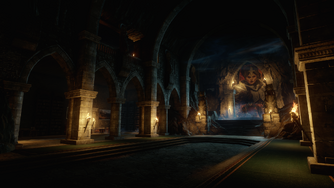 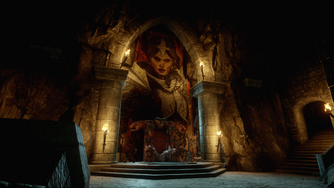 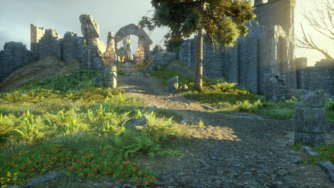 Top of the Caer Oswin castle 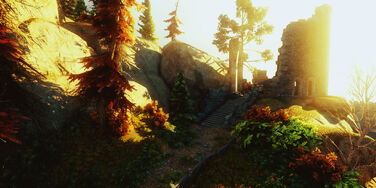 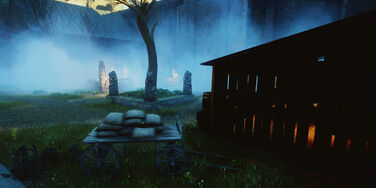 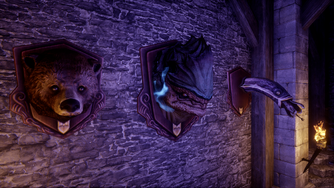