Bryce Cousland is the Teyrn of Highever making him one of the most powerful nobles in Ferelden. He is the husband of Eleanor Cousland, father of Fergus Cousland and also the Human Noble.

Bryce Cousland is a descendant of Sarim Cousland and one of only two remaining Teyrns (the other being Teyrn Loghain Mac Tir).

During the Orlesian occupation Bryce fought in the Army of the North alongside Arl Leonas Bryland of South Reach and Arl Rendon Howe of Amaranthine at the Battle of White River, from which only fifty rebel soldiers escaped alive. He was injured in the arm during the battle while saving his friend Rendon from a chevalier. After the retreat was sounded, Bryce and Leonas carried their gravely injured friend to a freehold in Redcliffe and stayed with him for a month while the rest of the survivors left to find the Army of the South. When Bryce and Leonas finally rejoined with the army, making the journey on foot, Prince Maric personally awarded them medals of valor. When Rendon married Eliane Bryland, Bryce and his fiancee were the only ones to come witness their vows.[1]

After King Maric reclaimed Denerim, the rebel army knew the Orlesians would attempt to take back the city by sea. Bann Fearchar called upon every available soldier to bolster his fleet in preparation for the attack. With the help of the soldiers the crew on every one of Fearchar's ships was doubled, and those soldiers who were unable to keep their rations down were stationed along the rocky coast of the Waking Sea to protect the ships by land.

Lord Bryce Cousland, a decorated young military commander, joined the Bann's fleet and led a contingent of soldiers from the deck of Eleanor's ship, the Mistral. Bryce and Eleanor's first meeting went so terribly that it was immortalized in the famous sea shanty called "The Soldier and the Seawolf".

Although Eleanor and Bryce initially came into to conflict with each other, the two worked well together. Together Eleanor and Bryce destroyed a dozen warships in the Battle of Denerim Harbor, and the two soon became good friends.

Shortly after the battle Bryce Cousland's father, Teyrn William Cousland, died of an illness, and as his only son, Bryce was forced to deliver the body from South Reach to Highever. When Bryce arrived at Highever, the nobles were shocked to see the Couslands return to their home after a near seventy year absence, and quickly swore fealty to him. Many of Amaranthine's freeholders soon swore allegiance to Bryce, instead of their arl, which complicated the proceedings of Bryce's ascension to Teyrn.

It ultimately took Bryce four months to claim his seat as teyrn of Highever, and every day as he waited he sent a letter to Eleanor, some days Bryce even sent more than one. The two eventually met face to face once more at King Maric's formal coronation in the capital.

At the coronation Bryce attempted to propose to Eleanor by singing all ten verses of the Soldier and the Seawolf, he only got to three when she accepted his proposal.[2]

According to Dairren, Bryce is a popular and respected man whom many say should have been king rather than Cailan.

Bryce and Fergus are preparing the armies of Highever to march for Ostagar when Duncan makes an unannounced arrival during his search for new recruits. Arl Howe, a long-time friend and ally of Bryce's, is also there waiting for his troops to arrive. After a brief discussion Bryce sends his child off to say goodbye to Fergus, while Duncan, Rendon and Bryce discuss some important matters.

Later, Bryce comes to speak with Fergus before they leave with the bulk of the army. However, during the course of the night Arl Howe's men attack Highever and during the fighting Bryce is badly wounded. Yet, he still attempts to help Ser Gilmore and the remaining guards as he searches for his family. By the time he makes it to the kitchen his wounds overwhelm him. Bryce tries to force his family to escape through the servant's entrance before Howe's men make it any deeper into the castle. Eleanor will not leave and stays with Bryce in his final moments. However Bryce's remaining child escapes with Duncan to become a Grey Warden.

Bryce later appears as the specter within the Gauntlet during the quest of discovering the Urn of Sacred Ashes, but only if the Warden is from of the human noble origin.

In the quest Rescue the Queen, Arl Howe can taunt the a Human Noble by claiming that he made Bryce watch Eleanor kiss his feet before killing them both, before starting a fight.

Teyrn Cousland's first name was originally Byron (evident by the name of several files in the toolset referring to him as such), but it was eventually changed to Bryce before the release of the game. 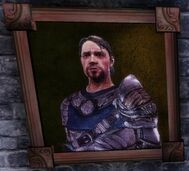 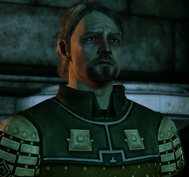 Retrieved from "https://dragonage.fandom.com/wiki/Bryce_Cousland?oldid=875832"
Community content is available under CC-BY-SA unless otherwise noted.