The bronto is an animal living mostly underground. It is herded by the dwarves but some also live in a wild state underground and other parts of southern Thedas.

"There's only two things a noble will step aside for: Paragons and angry brontos."

This hulking beast was originally bred by the dwarven Shaperate as a beast of burden and food source, the rough equivalent to surface oxen and cows. Some versions of bronto have even been developed as dwarven mounts, valued far more for their sure-footedness and stamina than for their speed. While present within Orzammar in large numbers, some bronto still exist in packs within the Deep Roads, having returned to a wild state after the fall of the dwarven kingdoms. They require remarkably little sustenance, consuming organic material from water, fungus and even rocks (hence the "rock-licker" appellation used by many dwarves to describe bronto), and exist in primarily dormant states until provoked. An angry, charging bronto is considered to be a rather dangerous opponent.

—From Tales from Beneath the Earth by Brother Genitivi.[1]

The Art of the Winter Palace (Bronto) 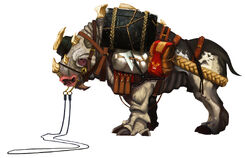 Concept art of a Carta bronto in Dragon Age II.

Tier progression of bronto in Heroes of Dragon Age 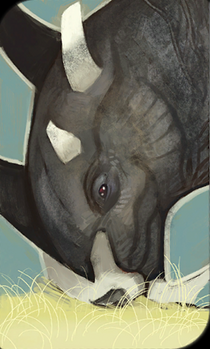 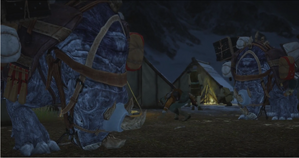 Brontos in Dragon Age: Inquisition
Add a photo to this gallery

Retrieved from "https://dragonage.fandom.com/wiki/Bronto?oldid=885934"
Community content is available under CC-BY-SA unless otherwise noted.