Brogan Dace is a dwarf of the noble caste and member of House Dace as well as a skilled reaver and berserker. He is a companion in the The Golems of Amgarrak DLC.

He is a faithful warrior with decades of field experience fought alongside his brother Jerrik Dace in many critical campaigns, but never sought or received the same glory heaped upon his older sibling. Yet he is content to remain in his brother's shadows. Each time House Dace mounts a foray into the Deep Roads, Brogan is there on the front lines. Considered a trifle gullible and even simple by some warriors, most consider him as solid and dependable as stone. Brogan's loyalty has never been in question. He shares a deep bond with his brother, Jerrik. Such brotherliness is a rarity among the high nobles of Orzammar.

Brogan went missing in recent months on an expedition mounted by scholar Darion Olmech. What business House Dace had with Darion has been the subject of much speculation, but Lord Anwer Dace maintains a stony silence on the matter. He publicly declared that Olmech's expedition is dead, and observed a three day mourning period for the brave souls of House Dace. Jerrik refused to believe his brother was dead and invested his own coin and resources to mount a rescue operation.[4]

This section contains spoilers for:
Golems of Amgarrak.

Brogan is found by his brother Jerrik and the Warden-Commander, trapped in a level of the Fade within Amgarrak Thaig. He has been made mentally unstable by extensive exposure to pure lyrium, but is steady enough to wield his weapons. Upon finding the corpse of Darion, he successfully convinces Jerrik to destroy the forge within Amgarrak to make sure that the experiments that took place there could never be repeated again. Brogan assists in the destruction of the forge along with the Harvester. During the battle with the Harvester however, Amgarrak incurs heavy structural damage and after the battle ends he flees the thaig along with Jerrik and the Warden-Commander. 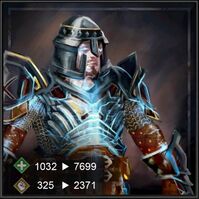 Retrieved from "https://dragonage.fandom.com/wiki/Brogan_Dace?oldid=862352"
Community content is available under CC-BY-SA unless otherwise noted.