Bring Me the Heart of Snow White is a companion quest for Vivienne in Dragon Age: Inquisition.

Vivienne requires the heart of a wyvern to complete an alchemical formula. Though all wyvern hearts look more or less the same, she specified that it needs to be from a rare beast known as the snowy wyvern.

The quest is available after Wicked Eyes and Wicked Hearts even if they are not friends. In Dragon Age Keep however only an Inquisitor who is friends with Vivienne can mark this quest as completed.

Vivienne requires the heart of a wyvern to complete an alchemical formula. She specifies that it needs to be from a rare snowy wyvern; however, she does not specify at this point why she needs the formula.

The "wyvern" in question is in fact a white Gurgut, located in the northern part of the Exalted Plains. The Inquisitor needs to unlock and complete the war table operation Gain Access to Ghilan'nain's Grove in order to access the grove where gurgut are located; the location for acquiring this operation can be found a ways east from an ocularum, north of Fort Revasan. It costs 5 Power to complete.

To find the snowy wyvern continue on north from the entrance to this area, following the quest marker. It is also possible to collect a heart from normal gurgut in the area and return it to Vivienne, pretending it's the heart she seeks. Keep in mind there is a dragon near the eastern edge of the same area if not already killed, so it is advisable to stay close to the western edge where the wyvern is located if not looking for a tough fight.

Upon returning to Skyhold, give the heart to Vivienne to complete.

Note: Vivienne's Alchemy Notes can be found in her room once the quest has been given. The notes provide insight into the purpose of the heart but the Inquisitor cannot talk to Vivienne about the notes and finding them has no bearing on the quest outcome.

If either the common or snowy wyvern heart is given to Vivienne the quest completes immediately, just before the cutscene with Bastien. The following two items are not received until after a follow-up conversation with Vivenne at Skyhold:

When returning to Vivienne with the heart, the Inquisitor is presented with a conversation choice. Results are as follows:

after talking to her again

If Inquisitor gives Vivienne the real heart, the next conversation the Inquisitor initiates with Vivienne relates to her history with her lover. If given the common wyvern heart, Vivienne will reveal that she's aware of the Inquisitor's duplicity. Further approval gains and losses can be seen here.

Note: It is recommended to obtain both hearts and present the false one with both in your inventory if you wish to deceive Vivienne. 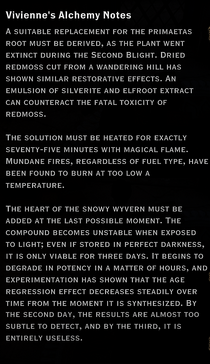 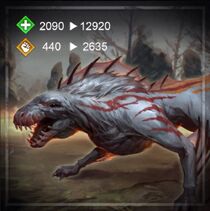 Artwork of the Snowy Wyvern in Heroes of Dragon Age
Русский
Community content is available under CC-BY-SA unless otherwise noted.
Advertisement