The Wounded Coast, Sundermount, or Darktown

Bounty Hunter is an Act 2 side quest in Dragon Age II. The quest is only available if Grace and the other apostates were sent to the Circle during the Act 1 quest Act of Mercy.

The Kirkwall Templar Order is offering a gold bounty for the death or capture of several notorious apostates who have escaped the Gallows.

This quest is acquired via the Chanter's Board.

Kill each of the apostate mages that the templars have placed a bounty on (see the gallery for maps):

The reward for this quest is granted after the last of the three has been killed; there is nobody to turn this quest in to. 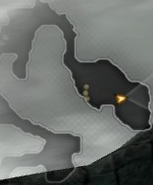 Location - Heborah de Soliere
Add a photo to this gallery
Retrieved from "https://dragonage.fandom.com/wiki/Bounty_Hunter_(quest)?oldid=670148"
Community content is available under CC-BY-SA unless otherwise noted.