Known as "maleficarum," blood mages are feared not only for the incredible power of their spells, but also their ability to control minds. Templars hunt blood mages relentlessly, yet despite their efforts, Kirkwall sees more instances of blood magic with each passing year. Some whisper that the Order's relentless hunt has driven good intentioned apostates to blood magic in their desperation to survive and keep their freedom.

Blood Mage is one of the specializations available to the mage class in Dragon Age II.

Nothing inspires as much wild-eyed terror as the Blood Mage. Mages of this type take the raw energy of life and twist it to their own purposes. They can corrupt and control, and sustain their power by consuming the health of others, willing or not. The effects can be vile, but this specialization isn't limited to madmen and monsters. Many see it as the only form of magic that is truly free, because it's tied to the physical, not favors to spirits or demons. It remains an undeniably violent and self-destructive discipline, however, the Blood Mage must be careful. The temptation to take just a little more is always there.[1] 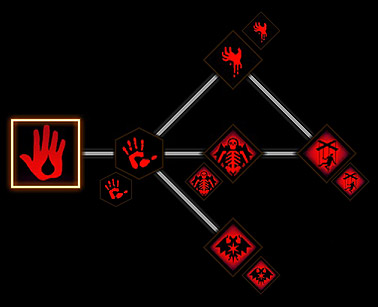 Compared to the Origins variant of Blood Magic, this specialization isn't as offensive, but it does have its uses.

When using Blood Magic, it's always wise to watch your health, as it becomes your mana bar. Over-casting spells can easily kill a player who isn't keeping an eye on their health bar. To aid in this, there are many items that can increase the health-to-mana ratio, up to 1:7 max.

By using your health instead of your mana to fuel spells, two benefits are gained. Players can forgo wasting attribute points on Willpower for higher Constitution and more Sustained Spells can be used, as the mana bar essentially becomes useless. Do note that magic armor requires Willpower, at most requiring 31 Willpower. If you wish to keep your armor high, only raise Willpower to 31 before switching to Constitution and Magic.

The downside to the usage of Blood Magic is the inability to heal from regular healing spells and potions. This can be circumvented through abilities and items that increase health regeneration, the Sacrifice spell, and the Grave Robber spell. Despite the description, the Death Syphon upgrade doesn't restore health with Blood Magic active.

Blood Magic's only offensive spell comes in the form of Hemorrhage. On its own, it has average physical damage, but when upgraded, it easily becomes an incredibly powerful spell. When foes are staggered by a warrior, the spell does a whopping 900% physical damage through armor in a large area, easily decimating the health of those unlucky to be staggered. It is for this reason that Blood Mages should keep Fenris around for his two-handed staggering abilities.

Blood Slave has its uses for certain enemies but is basically an upgraded Walking Bomb when upgraded. While it does control normal-ranked enemies, it only works for 10 seconds, and enemies strong enough won't die afterwards. It's advised to use this in a cluster of weak enemies so when the puppet dies, it basically serves its purpose as a homing bomb.

Ultimately, a Blood Mage's value is versatility in sustaining spells and controlling the battlefield from afar, as well as its unusual hardiness for a mage, allowing it to function either close or far from the fray.

The "Improves blood magic" property has been replaced with a property that allows Blood Magic to grant the equivalent of 1 more point of mana per point of health. By default, Hawke's Blood Magic already grants a 1 HP: 2 MP ratio. Several items increase the mana with a ratio of 0.25. These properties also apply to Merrill's Blood of the First in the same way.

Before patch 1.3, the ratio for blood magic items was a lot higher, with a 1:1 ratio or more. This has been altered to balance the game, making sure that you can not render health cost negligible with a 1:7 ratio.

Generic equipment, including light armor, accessories, and staves, can sometimes be found with this property (especially at the shops in Lowtown.)