Commissioned by an infamous Nevarran dragon hunter, this armor was crafted in a time when dragons had almost been hunted to extinction. Infused with their blood, the armor gained notoriety after the hunter died at the hands of men rather than the dragons it was designed to protect him from.

It is mainly a silver and white in color with a crimson dragon painted upon it, much like the Dragon Age: Origins logo. It requires 38 strength to wear and is made of silverite. When downloaded, you will only have the Breastplate in your inventory. Due to its strength requirement, purchasing the remaining pieces of the set at the beginning of the game (if you have the gold to do so) isn't recommended as it would just take up space in your inventory. The helmet, boots, and gloves can be bought from Bodahn Feddic at the party camp.

BioWare has issued an update to Blood Dragon Armor to fix an issue with the chest piece not rendering properly on a female elf. 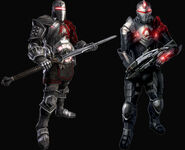 Dwarf in the Blood Dragon Armor

Retrieved from "https://dragonage.fandom.com/wiki/Blood_Dragon_armor_set_(Origins)?oldid=773199"
Community content is available under CC-BY-SA unless otherwise noted.