Blight wolf is a wolf that is inflicted with the darkspawn taint and has turned into a ghoul.

In Blights past, as the corruption of the darkspawn spread through the wilder areas of Thedas, it would infect the animals found there, and the more powerful of them would survive and be transformed into a more vicious and dangerous beast. A blight wolf is one such example, a kind of ghoul, mad with the pain of its infection. Only through the overriding command of the darkspawn does it still retain some semblance of its pack instincts. Blight wolves are always found in large groups and will tend to overwhelm a single target if they can, using their numbers to their advantage. It is fortunate that these creatures rarely survive their corruption for long.

The following characters, lore and events in this section are non-canon in Dragon Age and exist only within the Dragon Age tabletop RPG.
“Scholars believe that animals cannot truly hate themselves, but if there was any beast that could, surely it would be blight wolves. These tainted animals will have almost invariably slaughtered their original pack, the focus of a wolf’s life, before being forced to join with other equally miserable blight wolves at the behest of their darkspawn masters. The darkspawn use them for hunting, a task at which they excel. A lone blight wolf is a slavering horror that will attack anything of living flesh that it can smell and their senses are keen.[1]” 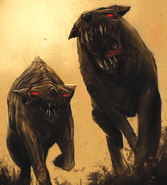 Blight wolves[1]
Add a photo to this gallery

Retrieved from "https://dragonage.fandom.com/wiki/Blight_wolf?oldid=860248"
Community content is available under CC-BY-SA unless otherwise noted.