The Blades of Hessarian are an armed religious milita and an Andrastian cult operating along the Storm Coast of Ferelden. They claim their work is often misunderstood and their true purpose is to serve Andraste and whoever proves worthy of wielding them.

The body may die but the soul is ever-lasting. Andraste's human form was put to the sword and burned, but the fire only purified her and made her immortal. She was called to the Maker but saw with clear eyes that her work was not yet done. She went to Maferath's side, seeking an executor of her will, but saw the traitor for what he was. She went to Hessarian's side, but saw that Hessarian was not yet ready to give himself. And so she went to the lowly Alamarri slave Trefir, who served the Archon, and gave unto him the great Sword of Mercy with which her mortal life was ended. To him she said: "Take this sword and with it bring my judgment to the world." And Trefir took the sword, and became an instrument of Andraste's justice.

—A Blade of Hessarian, telling of the order's founding[1]

The Blades of Hessarian are an ancient secret society who believe they serve Andraste and were chosen to bring her judgment upon the weak and the corrupt. The order was founded, according to their tales, by the Tevinter slave Trefir, who returned to the lands of the Alamarri bearing the Sword of Mercy. Since then, the Blades followed the one who bore the sword with unquestioning loyalty, as he or she was considered to have been chosen by Andraste.

Chantry scholars have determined that Trefir's account, detailed above, is pure fabrication. If Trefir even existed, it is likely he stole the Sword of Mercy from Hessarian, his master, before fleeing to what is now Ferelden. Less generous interpretations maintain that Trefir simply passed off his own sword as the Sword of Mercy to gain power and influence.

The last recorded sighting of a Blade of Hessarian was in 8:12[Bugs 1] Exalted[2].

The Inquisitor first hears of the group when scout Harding briefs them on the disappearance of her scouts. When exploring the Storm Coast, the Inquisitor encounters members of the Blades of Hessarian both randomly and as part of the quest Cleaning House.

When clearing one of their outposts during Cleaning House, the Inquisitor finds a note mentioning an amulet called Mercy's Crest. If the Inquisitor chooses to craft this amulet and equip it, they can safely enter the group's main camp. Upon arrival, the leader challenges the Inquisitor to fight him regardless of whether the Inquisitor approaches him peacefully. Once the fight is over, the Inquisitor can talk to one of the members. He explains they were stuck with their previous leader and they are happy with someone as worthy as the Herald of Andraste taking over their group. At this point any member of the Blades of Hessarian encountered on the coast will be an ally, and they are recruited as agents of the Inquisition under Cullen. 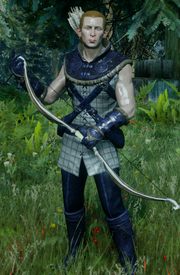 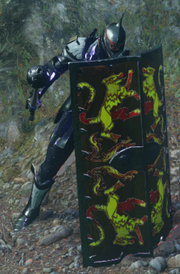 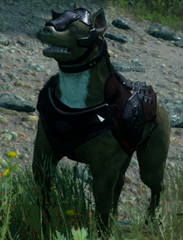 Hessarian Hound
Add a photo to this gallery

Retrieved from "https://dragonage.fandom.com/wiki/Blades_of_Hessarian?oldid=889903"
Community content is available under CC-BY-SA unless otherwise noted.