At a touch, the gate swung wide,
And the Light parted before them like a curtain
Swept aside by nothing.

The Black City, once known as the Golden City and the heart of heaven, is a city in the Fade, said to be the former seat of the Maker or the realm of the Old Gods, depending on the religious perspective.[2]

The Chantry teaches that after the Maker created His firstborn, He "called forth a city with towers of gold, streets with music for cobblestones, and banners which flew without wind".[3] It was a perfect, holy citadel[4] where He dwelled on His golden throne,[3] and spirits populated its many spires.[5][6] The Maker's mortal children entered the city when they died, returning to His side.[7] When His secondborn started to worship the Old Gods and thus committed the Original Sin, the Maker abandoned the Golden City and His ungrateful creations[4][8], and it sat locked and empty.[5][4]

Dissatisfied with spirits, the Maker expelled them from the Golden City, but there are conflicting accounts on the timing of this event: before the creation of men[5][6], directly after that ("sealed the gates")[3] or when He left the city.[5]

Some accounts suggest that the Old Gods began whispering to humanity from the Golden City in -2800 Ancient, three hundred years after the arrival of humans in Thedas.[9] People of ancient Tevinter believed the Creator had abandoned the city long before that and they were adrift, rescued by the Old Gods.[8]

Elves believe that their gods have been trapped in the Eternal City at the heart of the Beyond[10] and that Fen'Harel still roams the Beyond, keeping watch over the gods lest they escape from their prisons.[11]

The Saga of Tyrdda Bright-Axe mentions the Golden City as a place filled with treasure.[12] An Avvar leader, Thelm Gold-Handed, tried to forge an alliance with Tyrdda's tribe and cross the Waking Sea in order to reach the Golden City.[13] Tyrdda refused Thelm's offer, stating that his dreams were made of lies.[14]

In -395 Ancient (800 TE) seven Magisters Sidereal, each a High Priest to one of the Old Gods,[15] opened a gate into the Golden City with blood magic and entered it physically. The city turned black as soon as they arrived, and the mages were cast back to Thedas as the first darkspawn, triggering the First Blight.[16]

Avernus stated that the Black City holds "an answer to what the taint is."[17]

Of note is that Corypheus, one of the Magisters that allegedly turned the Golden City black, mentions in his encounter with Hawke that the city was already blackened when he and his compatriots entered it, directly contradicting one of the most central pillars of Chantry canon.

“The Black City is at the realm's heart and serves as a sort of corrupted sun. It is unmoored from time.[18]”

Today the Black City is a home of darkness and nightmares[4] with cold and twisted spires[19], "its towers forever stained, its gates forever shut".[20] An island[21] with the city is the one constant geographical feature within the Fade. At any time, one can look up and see it in the sky, always in the distance.[22] Actually traveling to the Black City from elsewhere in the Fade is impossible. Even the most powerful spirits and demons seem to avoid the place[23][24] lest they become tainted.[5]

The Chantry says there is no more heaven for souls to pass into after death. The faithful are gathered to the Maker's side while the rest are left to wander endlessly in the Void.[7] This is not a form of punishment, but a consequence of human corruption. When the Chant of Light is sung from the four corners of the world, the Maker will return, restore the Golden City, destroy the darkspawn and make the mortal world a paradise.[5][7]

According to the Chant of Light's Canticle of Exaltations, the Black City has seven gates, which Kordillus Drakon I prophesied will someday shatter and cover both the mortal and spirit realms in darkness.

The Black City is visible in the sky when the Warden travels into the Fade during Broken Circle, and during the Magi Origin.
This section contains spoilers for:
Dragon Age: Inquisition.
The Black City is visible in the background when the Inquisitor is drawn into the Fade. If present, Solas comments that he has never seen the Black City so close before, while Cole delivers a cryptic line "They still remember when they were higher, before it woke up and everything fell." 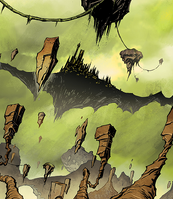 The Black City in Dragon Age: Until We Sleep