Birthright is an Act 1 companion quest for either Bethany Hawke or Carver Hawke in Dragon Age II. During this quest Hawke will search for their Grandfather's will, which could prove that the estate belongs to the Amell family.

In Act 1, stop at Gamlen's house to hear Leandra and Gamlen argue about money and about Grandfather Amell's will. Gamlen will say that nothing was left for Leandra. He will also say that the will is still in the Amell estate vault, which is no longer accessible since slavers now own the estate. After this conversation, speak to Carver or Bethany and discuss how to break into the vault in order to initiate the quest.

The underground passage into the Amell Estate Cellar can be found outside Anders's Clinic in the northern part of Darktown. Note that if Hawke's sibling is not in the active party upon entering, the game will force a party selection with them locked in for the duration of the quest.

Note: There is a Standard-ranked trap in the cellar. If the player wishes to disarm it for additional xp, it is a good idea to wait until they have a rogue with a Cunning score of 20 or greater.

Inside the cellar, expect some resistance from the Slaver enemy type, which is resistant to the frost element, making Winter's Grasp, Cone of Cold, and basic attacks from the "Imported" Circle Staff/Mercenary's Staff less effective. They are weak to fire damage, however, so make good use of Fireball, particularly in doorways and other choke points where enemies have no choice but to cluster closer together. Bursting Arrow has a similar effect and should be used in a similar fashion, if available. Bethany or mage Hawke should equip a fire staff, possibly their prologue staff, unless something stronger is available. There are three melee Slave Guards in the first chamber, so eliminate them with their weaknesses in mind. Then, loot the area for Codex entry: History of Kirkwall: Chapter 1 and a bunch of randomly-generated items.

Head upstairs to what will likely be your first Assassin encounter (if you haven't fought Friedrich and undertook this quest immediately after gaining access to Kirkwall). Their tactics revolve around quickly performing a somersault before fading into stealth (causing knockback in the process), unable to even be targeted, then appearing behind an ally to inflict massive damage with a backstab. On Nightmare this technique is not only fatal, enemy abilities have half the cooldown compared to Normal difficulty, allowing them to re-use it within a few seconds. Add in their Elite rank conferring greater health, as well as a personal stock of potions to restore it when low enough, and these enemies will be an annoyance when and wherever they appear.

That being said, there are ways to outmaneuver them. First, they can't complete the backstab without actually getting behind the targeted character, so taking manual control of that character and pressing their back to a nearby wall and waiting often forces the Assassin to abandon the attack. Standing around doing nothing is a good way to get damaged by the other enemies, but it's often still less damaging than the backstab, and ranged characters can still fight back from such positions. Second, if the Assassin is the last enemy standing in the group, they are scripted to stop using the backstab altogether. This tactic is often not possible, as most enemy groups will have several reinforcements that spawn in seemingly from nowhere, making it more prudent to defeat the Assassin first. The Amell Estate Cellar, however, only provides a few enemies per room with no reinforcements and plenty of walls, so both of these tactics are quite useful. A more advanced tactic is to use an area-of-effect attack to flush them out of stealth, but this requires a good understanding of where they may and may not be.

With these points in mind, eliminate this Assassin and his two cohorts, then check the storeroom to find a gift for Hawke's sibling (begins either Portrait of the Past or Family History) and Codex entry: The Amell Family.

Go through another hallway to the third main room, but watch for the Standard-ranked trap near the shaft of light. This room has another Assassin and three Normal-ranked slave guards. Defeat them with the same tactics as before. Do not enter the side room until you do, as this will generate three more enemies. In the side room you can find more loot and another codex entry, Codex entry: History of Kirkwall: Chapter 2.

In the final room before the vault, the party will face a slaver mage as well as other slavers. Disable the Simple-ranked trap while the mage makes idle threats to make things easier. He will spend most of the battle in a Barrier, allowing you to deal with his allies first. With them gone it shouldn't take much effort to defeat him. The key to the vault can be found on the mage's body, and Codex entry: History of the Circle will be on the floor in the corner across from the stairs.

Enter the vault to pick up over 9

as well as Grandfather Amell's will. The chest containing the will also holds an armor upgrade for Carver/Bethany:

At this point, Carver or Bethany will ask to take the will back to Leandra immediately. Agreeing with the sibling will transport the party back to Gamlen's house. 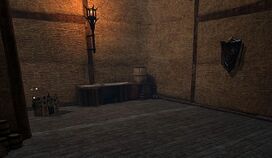 Chest containing item for the sibling quest (Bethany or Carver) and the Amell Family Crest. 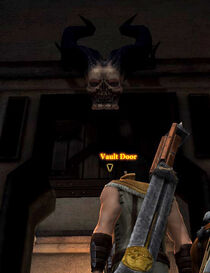 An ogre's skull hangs above the vault door. 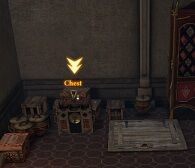 Chest in the family vault containing Leandra's parents' will.

The slavemaster
Русский
Community content is available under CC-BY-SA unless otherwise noted.