“Other people always took the risks to keep me free.”

Birthright
Portrait of the Past
A Symbolon

Bethany Hawke (born 9:11 Dragon[1]) is Hawke's younger sister and Carver's fraternal twin. An apostate mage, she received her magical training from her father, who was also an apostate.

Bethany's magic manifested when she was nine, when she threw a local bully across a field without touching him. Her family was forced to move in all haste, eventually settling on the outskirts of Lothering.[2] While she was noted for her curiosity about religious stories,[3] she mostly stayed hidden away at home. This was, of course, because of her arcane talents. A traveler identified as only 'Sade' visited the Hawke family after the onset of Bethany's gifts, describing her as 'reveling in the stories of the far and away' and 'masterfully reserved'. Once, when she and a childhood friend of the Hawke siblings, Ebrin 'Peaches' Janith, were being chased by a wild dog, Bethany accidentally made it go to sleep. After this incident, Bethany kept herself in even more secrecy. The friend did not betray her to the templars because 'she was too nice to be magic.'[4]

Bethany has one of several facial structures and hair styles, depending on the customization of the player's character. The selection works as follows:

As Lothering is overrun with Darkspawn, Bethany is forced to flee with her family. In a surprise encounter with an ogre, and if Hawke is a mage, Bethany will attack an ogre, be grappled, smashed to the ground and killed. However, if Hawke is a warrior or rogue, Carver takes her place. Following the fight, Bethany accompanies her family to Kirkwall.

Upon arrival, she spends a year working with her elder sibling in servitude to repay their passage into Kirkwall. Afterwards, Bethany and Hawke overhear about The Deep Roads Expedition and agree to join as a last resort to acquire enough wealth and influence to cow the templars from scrutinizing them too closely. Though she appreciates the trouble her family took to keep her out of the Circle, the running, hiding, and constant fear for what their future would hold have taken their toll. She begins to express guilt when she sees how much the family sacrifices to keep her free, especially when she learned their mother gave up her life as a noble to elope with their father. Sometimes, she even wonders whether everyone would be better off if she'd been sent to the Circle from the very start. Through their time in Kirkwall, Bethany and Hawke work on reclaiming the family estate. After amassing the fifty sovereigns needed to fund the expedition, Bethany volunteers to join her elder sibling in the Deep Roads venture. Just as they prepare to go, Leandra begs Hawke to leave Bethany at home, as the expedition is too dangerous. Though Bethany remarks that she is "allowed to fight the darkspawn," but the final decision is made by Hawke.

If Bethany is left behind in Kirkwall when Hawke sets out for the expedition, she is arrested and taken to the Gallows just as Hawke returns from the Deep Roads. She remains in contact with her family and adjusts quickly to life in the Circle. She passes her Harrowing and becomes a senior member of the Circle, in charge of teaching young apprentices. A letter reveals that Ella has taken quite a shine to her. She is happy that she doesn't have to run anymore and supports the Circle.

During the Qunari siege of Kirkwall, she leads an attempt to save First Enchanter Orsino from the Qunari. Hawke and their companions arrived later on and dispatched the Qunari attackers. After Orsino regained consciousness, Orsino used his magic to revive Bethany, who was the only other Circle mage to survive the Qunari attack. Hawke is coldly received by Bethany, who utters sarcastic and ungrateful remarks, but she survives the siege.

As hostilities between mages and templars increase, Bethany is kidnapped by Grace and Thrask who are inciting a rebellion to overthrow Meredith, believing that the Champion is working for the Knight-Commander, regardless of their actual allegiances in the mage-templar struggle.

During The Last Straw (Quest), Bethany naturally wants to take the mages' side. If Hawke sides with the mages she's thankful to Hawke for siding with her kind and joins the party once again. She will then participate with the defense and evacuation of the Circle. If Hawke joins forces with the templars, she pleads with the Champion to not force her to choose between her family and her people. She can later be found in the courtyard of the Gallows, and asks Hawke if they'll fight her. If Hawke retorts by questioning if she would fight her own sibling as well, she responds by expressing doubt. However, Orsino convinces her that the mages must remain united during this crisis and she follows him into the Gallows.

The next time she is encountered is during the battle with Orsino. When he reveals that he studied the research of the Blood Mage Quentin, Hawke may mention that he was the man that murdered their mother, causing Bethany to withdraw from Orsino, shocked and appalled that Orsino protected the man that killed their mother, and claiming the First Enchanter could have saved Leandra. As Orsino begins his blood magic ritual, Bethany expresses her dismay that Orsino is planning on killing Hawke, whom he had promised to spare. She joins the battle against his Harvester form. After Orsino is killed, she still mourns him. When Knight-Commander Meredith prepares to execute her, Bethany accuses her of driving Orsino to such extremes but accepts her sentence, stating that she knows what will happen.

Hawke can now choose to let Meredith go through with the execution, or speak up in Bethany's defense. If Hawke defends her, she expresses her gratitude with a hug and re-joins Hawke's party in time for the final battle with Meredith.

If Hawke sides with the mages, Bethany is relieved. She can join the party defending the mages in the Gallows. In her final dialogue she comes to the conclusion that her magic comes from the Maker and he wouldn't want mages to be treated as they are.

If taken on the Deep Roads expedition she contracts the taint and dies unless Anders is in the party, in which case she can be recruited into the Grey Wardens as the only recourse to save her life. If Bethany becomes a Grey Warden, she has very little contact with her family—contacting only Leandra to inform her of her survival and of her continued travels with the Wardens. She resents Hawke for coming out of the Deep Roads unscathed while she almost died and has been permanently changed. She's the only member of the Hawke family to return to Ferelden since their flight from Lothering.

During the Qunari siege in Act 2, she and several other Grey Wardens are attacked by the Qunari and receive support from Hawke. However, she cannot join Hawke to save the city from the Qunari. If Hawke tells her about the death of their mother, she tells Hawke that she already heard the news and that the Grey Wardens helped her hold a wake in her honor. She's glad Hawke was with her in her final moments.

Later, when tension between the templars and mages reaches its boiling point, she is abducted by Ser Thrask and used to get Hawke to join his cause. The plan fails however, and Thrask is killed along with the abductors.

Bethany can also be seen in the Deep Roads with Nathaniel Howe during the quest Finding Nathaniel, in which case she is surprised to see Hawke in the Deep Roads again. Bethany reveals that she is still sad and hurt. In addition to her fearing the day she will succumb to the taint, she is also grief-stricken by how much she misses her family. She explains that she tried to freeze herself emotionally to cope with her sorrow. Even so, she tries to accept that Hawke tried their best to save her. She does not give a proper goodbye.

During The Last Straw (Quest) Bethany arrives at the city in time to witness the start of the war. She finds Hawke and apologizes for her earlier attitude, thanks Hawke for saving her life, and wants to fight at Hawke's side. She no longer resents Hawke for taking her on the Deep Roads expedition. While she regrets that her life turned out this way, she takes solace in the Grey Wardens' noble purpose and doesn't regret helping them. Although she wishes she could have saved her brother Carver, she believes that whatever tribulations she has endured is all a part of the Maker's grand plan. When asked about how her role as a Warden could allow her to intervene when Grey Wardens are supposed to be neutral, her only reply is: "Right now, I'm not a Grey Warden. I'm your sister." She naturally wants to side with the mages, but still rejoins the party if Hawke sides with the templars.

Bethany Hawke Alive and Well:
In the DLC Legacy, a deranged sect of the Carta tries to kidnap Bethany due to her link to "the blood of the Hawke". Bethany can travel with Hawke to a secret Warden prison in the Vimmark Mountains in order to find the source of the aggression and uncover the harsh truth about the Hawke lineage.

If Bethany is still alive, the Inquisitor can ask Varric Tethras about her fate.

Bethany became a Grey Warden:
Varric states that she was last seen on Warden business near the border of the Anderfels. A conversation with Hawke reveals that they sent their associate Aveline Vallen to take her far away from Orlais when they heard about Grey Wardens acting strangely. A bottle of her ritewine can be found in Redcliffe, titled "Princess Piss"

Bethany became a Circle mage:
Varric states that she stayed behind in the Free Marches to help other mages from the Kirkwall Circle. A conversation with Hawke reveals that they sent their associate Aveline Vallen to take her far away from the Free Marches when they heard about Grey Wardens acting strangely.

Either way, if Hawke lives after the encounter with the Nightmare, it is mentioned that they will likely reunite.

If Bethany was taken into the Deep Roads, Varric alludes to her fate during the Keeping the Darkspawn Down side quest if he is in the party.

Portrait of the Past

Friendship with Bethany can generally be earned through acts of kindness, by siding with mages or by supporting family.

Rivalry with Bethany can generally be earned by choosing aggressive responses, by siding against mages or by exploiting Fereldans.

An upgrade for Bethany's armor, Hawke's Pinions, is available in Act 1:

A Letter For Bethany (conditional)

A Message from Lothering (conditional) 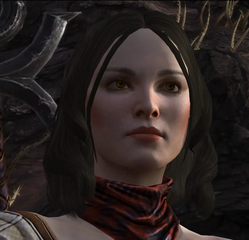 Close up of Bethany 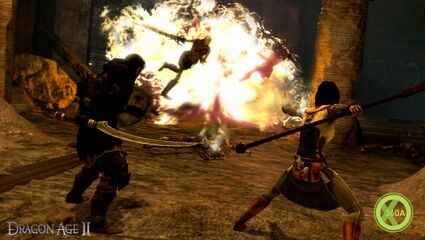 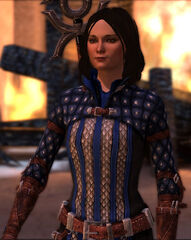 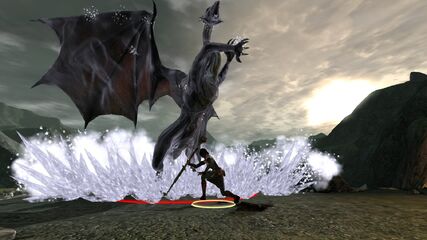 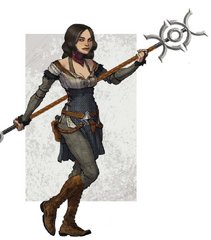 Concept art of Bethany in Dragon Age: The World of Thedas Volume 2. 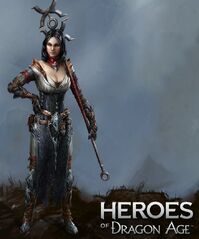 Artwork of Bethany from Heroes of Dragon Age

Artwork of Bethany's tier progression in Heroes of Dragon Age