Go to the Gallows and then to the Templar Hall. Talk to Orsino or Meredith, depending on who sent the letter.

When accepting the quest from Meredith:

When accepting the quest from Orsino:

After Hawke gets the quest, go to Hightown at night and head to the Hightown estates neighborhood.

There, a battle with a group of Templars and 5-6 Mages will automatically begin when the party enters the area near to where Hawke need to be. Afterwards, loot the bodies to find a note that will instruct Hawke to head to the Docks (and an armor upgrade for Sebastian).

Go to the Docks and follow the arrow to the destination.

There will be another cut-scene before Hawke has to battle another group of Templars and Mages. There are two Standard-ranked traps (requiring 20 Cunning to disarm) in the main room, one on the eastern side and one on the western side.

There are at least two Templar Hunters and a Lieutenant alongside an Elite-ranked Enchanter in this fight.

There is an armor upgrade for Anders in the Warehouse and a gift for Fenris.

Keran will be here in templar plate regardless of the resolution of Enemies Among Us; he will tell Hawke that someone close to them has been kidnapped by the rebels and that they have been taken to a hideout on the Wounded Coast. At this point Hawke has the choice of:

Note: If it's Hawke's love interest that is supposed to be taken, Keran will describe them. However they will still be able to be selected and taken to the Wounded Coast.

If Hawke agrees with his views on Meredith, then he will automatically be allowed to leave.

Loot the area, there is a Complex-ranked chest (30 Cunning, 150xp) to the right of the entrance and the Blade of Mercy.

Head to the Wounded Coast. Take the low path and head south towards the Ruins. Fight a small group of Templars and Mages on the way. A cut-scene will then occur where Samson will approach Hawke.

Samson will either admit that he conspired against Meredith and wanted to see her "out on her ass", or that Thrask thought he could change things from the inside. Selecting the humorous response will grant

After the scene continue down the path until the party reaches the main group of Templars/Mages. They are being led by the templar Thrask, who will implore Hawke to side with them against Meredith. Behind him, whoever was taken hostage will be lying on the ground, unconscious.

Whether she was sent to the Circle, or let her go during the quest Act of Mercy, Grace will call for the hostage to be killed and then turn on Hawke. When speaking to Grace:

Grace order Alain to kill the hostage; if you choose the diplomatic or humorous response then he will refuse to do it.

Grace kills Thrask and then attacks you.

During this battle, Grace herself is easily taken down, but becomes a Pride Abomination upon death. After the battle, Samson will return with Cullen. As with Keran earlier in this quest, Hawke will have the opportunity to decide the fate of Alain and Samson.

After the fight, talk with Cullen to decide the fate of the surrendering mages and rogue templars. Cullen will permit Samson to become a Templar again if Hawke requests that he give him another chance. Hawke can also ask Cullen to be merciful to Alain and the other mages who are arrested.

Note: Mage Hunter and Arcane Defender Achievement: This is the final chance to side with either the Templars or Mages. During the conversation with Cullen:

The achievement will not pop up until Hawke reports back to either Meredith/Orsino to end the Quest, providing they have sided with the same faction 4 times previously.

Cullen says to take Alain in for questioning.

Note: Cullen will make reference to his experience in Ferelden's Circle Tower.

Cullen asks if you have any recommendation for him to bring to Meredith:

Note: If Hawke's romance partner was the hostage, and you had them join the party before coming to The Wounded Coast, then they leave the party now.

On return to the Gallows Courtyard, speaking to Cullen will discover how Hawke's recommendation decided the fate of the surviving conspirators, but this step is not required.

Return to Orsino/Meredith to complete the quest.

Note: If Hawke got this quest from Meredith then they may be able to investigate at this point to learn some rather interesting things about her.

Afterwards, if Hawke returns to their estate, they will find a letter from either Meredith or Orsino that pertains to the quest The Last Straw. Note that once this letter from Meredith/Orsino is read, Hawke can no longer return to the Gallows without triggering the endgame. To indefinitely postpone that and still be able to read messages at home, Hawke can finish the quest except for returning to the Gallows and thus no message will appear at home.

Bethany/Carver will be kidnapped if they are alive. It does not matter if they are with the Mages, Templars or the Grey Wardens.

If Bethany/Carver is dead, then Hawke's love interest will be kidnapped. However, they will only be taken if they are not in their party when they travel to the Wounded Coast.

If Bethany/Carver is dead, the love interest is in the party, or there is no love interest, the companion with the highest friendship score who is not in the party at the time will be kidnapped.

If Bethany/Carver is dead, all possible companions have left or have not been recruited, and all remaining companions are in Hawke's party, Anders will be kidnapped even though he is no longer a companion.

Sebastian cannot be taken as a hostage. 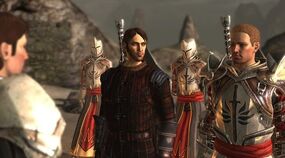 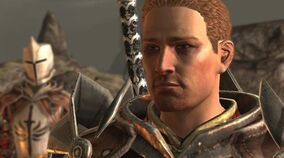