The dwarven Culture is in decline, and many dwarves have turned to the surface, bringing their customs and battle traditions with them. Anger is only part of being a berserker. Anyone can fly into a rage, but only a berserker can channel that anger into brutal hits that cleave through armor, flesh, and bone.

Berserker is one of the specializations available to the warrior class in Dragon Age II.

All warriors command respect, but the Berserker is an unrelenting physical force. The name of this specialization suggests rage, risk-taking, and that is certainly part of its effectiveness, but it would be a grave mistake to suggest that the Berserker is sloppy or undisciplined. It takes an incredible amount of control to know when to lose control. Battle momentum is the key: finding the balance between total commitment and over extending. The Berserker controls the pace of combat, setting a standard that the enemy can't match. In turn, they can be sustained by the mayhem they produce, and find new energy in every fallen foe. While they stand, while stamina remains, they have no match, but they can't stand back and let battle unfold. For the Berserker, battle always ends in glory, win or lose. [1] 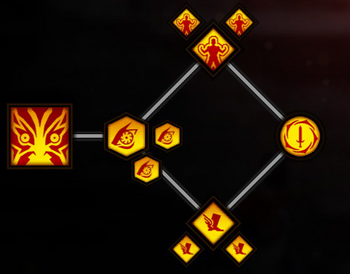 The Berserker is a powerful class specialization that offers the player the unique opportunity to increase the damage output by raising willpower rather than strength. A Berserker might also prefer to wear stamina-increasing items. Keep in mind that strength increases your attack value (your chance to hit) as well as your fortitude.

A Berserker isn't that easy to play either. You'll dish out tons of damage, but you might want to skip other sustained abilities as they reserve a percentual amount of your stamina and you'll always have consider the activation cost. The latter gets quite obvious with Adrenaline. Although you receive a stackable 5~8% damage bonus, you'll also lower your stamina reserve and thereby reducing the damage bonus of Berserk.

But as soon as you get access to Death Blow, things will start to get much easier.

Although the Battlemaster talents might look like a perfect choice for a Berserker, it might be wiser to have another party member (namely Aveline) focus on these talents instead. Rally has a lower cooldown than Second Wind and might temporarily boost the potentially low attack value of the Berserker by applying the benefits of Control to all party members. For the same reasons, it might also be wise to choose Heroic Aura with Anders.