Bears are wild animals common to the forests of Thedas. They are rarely seen during the day and don't attack travellers, unless provoked. Enraged bears are remarkably dangerous and can strike massive blows, capable of knocking a person off their feet.[1] Some rangers are known to summon bears to fight on their side.

Normally, bears are so shy and so inactive during the day that most people never encounter one at all. However, should a bear be provoked, they are remarkably dangerous. The normally placid-seeming creatures become enraged, and can strike massive blows with their paws.[1]

"No beast is more beloved by Dirthamen than the bear. When the world was new, Dirthamen gave one secret to each creature to keep. The foxes traded their secrets to Andruil for wings. The hares shouted theirs to the treetops. The birds sold theirs for gold and silver. Only the bears kept Dirthamen's gift, deep within their dens, they slept the months away in the company of their secrets and nothing else. When Dirthamen discovered what had been done with his gifts, he snatched the wings from the foxes, silenced the voices of the hares, and turned the birds into paupers. but the bears he honored for their steadfastness."

Bears are encountered mainly in the forested areas of Ferelden. Black bears are the most common type of bears. They can be summoned by a Ranger and Shapeshifters can transform into them. The Ranger's bear levels up with the character and thus makes for a great tanking ally, with high health and damage output. While the same applies to the bear form, its use prevents spellcasting and thus it should only be used as a last resort.

Great bears are far larger and more powerful than black bears. A Master Ranger can summon a great bear, marginally increasing its power and allowing for it to use overwhelm.

Bears can be found throughout Ferelden and Orlais. Large bears appear in the Hinterlands nly during the side quest Bergrit's Claws. The great bear, a bigger and powerful bear, is less common than a regular bear, but can still be found in great numbers across the Dales of Orlais. An even larger and more powerful version of the great bear, named Old Scarred Paw, appears with its cubs during the side quest A Bear to Cross. 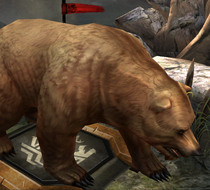 A bear in Heroes of Dragon Age

An Armored bear in Heroes of Dragon Age 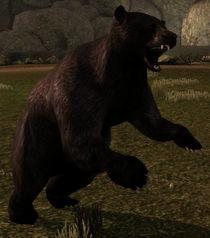 A black bear attacking in Lothering 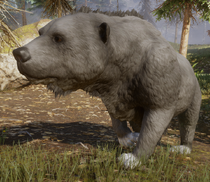 A large bear roaming in the Hinterlands 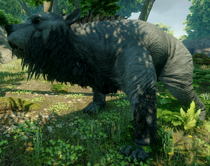 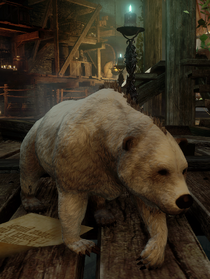 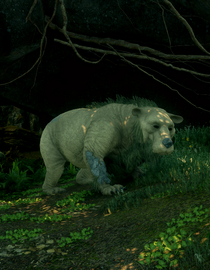 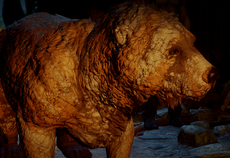