Bears are encountered mainly in the forested areas of Ferelden. Black bears are the most common type of bears. They can be summoned by a Ranger and Shapeshifters can transform into one. The Ranger's bear levels up with the character and thus makes for a great tanking ally, with high health and damage output. While the same applies to the bear form, its use prevents spellcasting and thus it should only be used as a last resort.

Bears can be found throughout Ferelden and Orlais. Large bears appear during the quest Bergrit's Claws in the Hinterlands. A bigger bear - great bear - is less common than a regular bear, but can still be found in great numbers. There is an even larger and more powerful version of the great bear, named Old Scarred Paw, who appears with its cubs during A Bear to Cross. 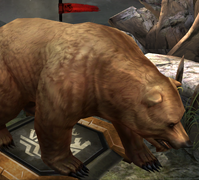 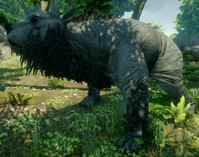 A Great Bear in Dragon Age: Inquisition
Add a photo to this gallery
Retrieved from "https://dragonage.fandom.com/wiki/Bear?oldid=878903"
Community content is available under CC-BY-SA unless otherwise noted.