Edit
watch 02:05
Wiki Targeted (Games)
Do you like this video?
Play Sound
“You're looking for a quick way out of the slums, right? You and every other Fereldan in this dump. Find another meal ticket.”

Bartrand Tethras is Varric's older brother and head of the Tethras family which was once a noble house in Orzammar. He is one of the prominent characters of Act 1, where Hawke and his or her companions have to gather money to get in on his expedition deep into the Deep Roads.

House Tethras was once part of the noble caste in Orzammar, until Bartrand's father was caught fixing Provings. Such was the disgrace that the family was exiled to the surface. Unlike his brother, Bartrand was born in Orzammar in 8:93 Blessed.[1]

Five years after his father died and mother went to alcohol, Bartrand became the new head of the exiled house and involved himself with the Dwarven Merchants' Guild.

By the time he was fifteen, Bartrand had doubled his family's fortune. The disgrace of House Tethras fueled his ambition and his once-noble title gave him an instant place among the kalnas, the old money elite of the Dwarven Merchants Guild; he used it to build alliances and business ventures as if he were a member of the Orzammar Assembly. He quickly became the heart of the Merchants' Guild social scene. The parties hosted at his family's estate were lavish returns to the lifestyle of Orzammar, and even the oldest and most powerful surface families found themselves fighting for invitations to dinner. He started courting Lady Raella Dace who comes from the noble House Dace.[2]

By the time Lady Ilsa died, Bartrand had made the Tethras family one of the Guild's most influential, but wealth and power on the surface couldn't sate him. He began to court alliances with the wealthiest ascendant families, branching into banking and mercenary companies.[3] The more coin he made, the more it became an addiction. He began to neglect his family and friends in order to work. He stopped throwing parties and attending them. Both his fiancée and his brother tried to convince him to take a break from running the Tethras business, to no avail. Lady Raella eventually broke off the engagement, a fact which Bartrand barely noticed.[4]

A year after Hawke's arrival in Kirkwall, Hawke and his or her sibling are trying to hide from increased Templar scrutiny. Bartrand is preparing an expedition into the Deep Roads to loot an abandoned thaig, and this provides an excellent opportunity to get away from Kirkwall - as well as the possibility to make a lot of money. But Bartrand refuses their request, asserting that he already has enough hired hands.

However, his brother Varric manages to include Hawke as a business partner after acquiring 50

, as well as a map of Deep Roads entrances from Anders. When they arrive at what proves to be a Primeval Thaig, which pre-dates known dwarven history, they hope to get increased profits from such a rare find. However, when they find an idol made of an unknown type of lyrium and potentially priceless, Bartrand seals them within the thaig, intent on claiming everything for himself. Hawke and their companions are able to escape through some back tunnels and discovered a cache of treasure that made the expedition profitable.

Bartrand disappears for the subsequent three years, though Varric suspects he has fled to Rivain. However, when he returns to Kirkwall, Bartrand has gone insane from his exposure to the idol. According to his steward Hugin, Bartrand believed the idol sang to him and forced his men to eat lyrium to make them hear the song, while mutilating his servants. During the quest Family Matter, the idol is nowhere to be found, as Bartrand sold it (though he accuses the recipient of "stealing" it) to an unknown woman, from whom he returned to Kirkwall to get it back. Bartrand is unable to say who she was, but he states that she "glittered like the sun, but her heart was cold as ice".

Varric wishes to kill his brother, though Hawke is able to influence his final decision. If Anders is in the party, he can temporarily bring Bartrand back to his senses. If he allows Bartrand to be killed, Varric will wish his brother farewell, before shooting him with a bolt. If Bartrand is spared, Varric will leave him in his estate temporarily, returning later to put him into a Chantry sanitarium.

Three years later, it is discovered that Bartrand had chipped a piece of the idol off and left it in his Estate, which causes the house to behave as if it was haunted and the Veil was torn. When Varric picks up the piece of the idol, he starts to exhibit the same symptoms of madness Bartrand showed, at which point Hawke can either let Varric keep the piece, or can take it from him with the intent of having Sandal destroy it.

Tier progression of Bartrand Tethras in Heroes of Dragon Age 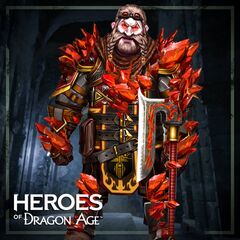