Bards follow an Orlesian tradition, acting as assassins, spies, saboteurs and following other secretive pursuits in the constant, and sometimes petty, struggles between nobles. Having taken the minstrel's art to new levels, bards are skilled performers and master manipulators; bards can inspire their allies or dishearten their foes through song and tale.

A bard is a minstrel who acts as an assassin, spy or saboteur. It is also one of the specializations available for the rogue class in Dragon Age: Origins.

A bard must know history so she does not repeat it. She tells the tales but is never part of them. She watches but remains above what she sees. She inspires passions in others and rules her own.

The creation of The Grand Game is credited to Jeshavis, Mother of Orlais, the first female gyðja or chieftan of the unified Ciriane tribe of humans in what is now Orlais. According to legend, she married two of the three so-called "Sons of Betrayal," the children of Maferath, and pitted brother against brother to the death to create a new nation and gird against Alamarri incursion. Her intrigue was considered "the seeds of elegance to come."[1]

As a bard, you are welcome anywhere in Orlais. Doors are opened to you with generous smiles, their wearers confident that no one would falsely pretend to such a title for fear of retribution. Your slightest request is immediately seen to. Your services are expensive and yet actively sought, and those who cannot afford them beg only to not have your displeasure turn their way. One day, however, you will awaken. You will realize the smiles are false, and behind them lies revenge. At the first moment of weakness, your brother and sister bards will be unleashed upon you like a pack of hounds, and you will realize they are not your brothers and sisters at all. For all your fancy intrigue, you have spent your life creating nothing of worth. You have been swallowed by the web of your own deceits, and the Game of which you believed yourself master? It moves on without you, uncaring.

A bard is something of a curiosity even in the courts of Orlais, where intrigue is as common as silk. Musicians and troubadours, doubling as spies, exploit their access to powerful nobility to glean secrets for employers who are usually nameless even to the bard. The nobles welcome such entertainers with full knowledge that any could be a bard; the thrill of outwitting a spy is a notion the Orlesian aristocracy can hardly resist. Unfortunately, when they finally realize that a master bard has been among them, it is usually too late. Bards use music to soothe hearts and cloud minds; in combat, their abilities to inspire allies and distract foes are legendary. Beyond their music, they are masters of dirty fighting, stealth and larceny.

In other parts of the world, bards are less prominent but no less dangerous. Bards travel wherever secrets have value: in Ferelden, they once played fairs and graced the courts of banns and arls, listening for secrets that could be used to sway the fiercely independent nobility. Outside of Orlais, most traveling entertainers are now merely musicians, but that only makes the spies more difficult to detect.[4]

Interestingly, for all its pretensions the life of a bard is one that is strangely open to all. Indeed, for all that a bard's training makes him or her a spy, it also makes them a storyteller receptive to the legends of all cultures and their preservation.[5] Skilled players are welcomed, whether human, elven or dwarven, mage or mundane, and female or male.[6]

Bard training is quite rigorous, and bardmasters often wring the sympathy and capacity for love from the individual being groomed. Cruel as this seems, such an composed, aloof demeanor is necessary for a bard to be able to perform their duties and sell their sympathies to the highest bidder.[7] The quintessential bard may in fact question whether they are even capable of love rather than treachery, though this training does not always wither an individual's basic compassion.[8] For some, it is ultimately a bard's honor which determines how or even whether they will accomplish their given task or contract.[9]

Bardic training includes an instruction in archery and dual-weapon knifework.[10] An example of the latter is a set of bardic drills called the Butterfly in honor of its gracefulness.[11] This drill involves a complicated series of dagger strikes: a parry and slash to an enemy's wrist, then a slash to the throat. Bards are trained to battle not only mortal, armored enemies but also darkspawn and creatures from the Fade. They are also versed in an assortment of weapons in order to be adaptable to any situation.[12] This includes being able to viciously dispatch an enemy in private and return immediately to one's present engagement, with immaculately clean hands and an unruffled demeanor.[13]

The training also includes more prosaic uses, such as two-score muscle exercises to allow a person to remain poised and confident to hide any sign of weakness from an enemy.[14]

Bardic combat involves a form of hand signals for communication in battle. Tapping one's bow with a little finger, for example, indicates from one bard to another that the enemy should be lured closer. Another gesture might indicate "not yet" in terms of battle strategy.[15] 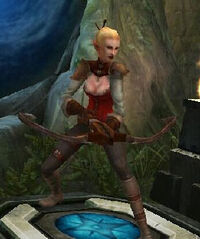 An elven bard in Heroes of Dragon Age 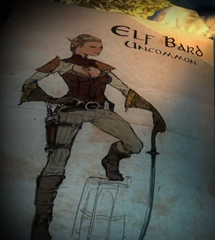 Concept art of an elven bard from Heroes of Dragon Age