watch 03:03
The Loop (Games)
Do you like this video?
“The Chantry foolishly forbids blood magic—but there are so many secrets to uncover.”

Avernus is a Grey Warden who has lived since the time when Wardens inhabited Soldier's Peak back in the Storm Age.

Avernus was a young mage in the Wardens at the time Sophia Dryden was Warden-Commander. During King Arland's siege on Soldiers Peak, Commander Dryden knew about Avernus' involvement in blood magic and ordered him to summon demons from the Fade to aid in the fight, although if questioned, Avernus will admit he probably would have done so even without Sophia's order. Yet, they did not account for the evil that exists in the Fade on coming out. After the tear in the Veil between the world of the living and the Fade opened, Avernus retreated to his lab at the top of the tower when the demons grew beyond his control. It was there he conducted his terrible experiments for centuries along with extending his unnatural life, ostensibly in order to keep the danger that now reside within contained. Avernus' research revealed that he could utilize the Grey Wardens' taint to combat the demons and hypothesized that the knowledge could help the Grey Wardens to grow even more powerful.

In the last room of Avernus' tower, The Warden will find Avernus himself. After telling him what the Demon has asked The Warden to do, Avernus proposes a second solution... to help him kill the demon possessed body of Warden-Commander Sophia Dryden and help him seal the tear in the Veil. He can still be betrayed once The Warden, Avernus, and Sophia are in the same room. After either Sophia or Avernus has been killed, the other will take the Warden to the next room and begin the ritual to close the tear in the Veil. Even if The Warden chooses Avernus to close the tear, he can still be killed once the ritual is complete. This yields the Robes of Avernus. He can also be persuaded to bow to the Warden's justice and thus can be executed without a fight after the Veil has been sealed. Alternatively he can be allowed to continue his research up in the tower, either as he was before, or ordered by the player to follow ethical constraints.

If he is questioned for details about the rebellion, he will mention that they specifically sought the aid of the then-current Teyrn Cousland, but were betrayed. They were ambushed by the king's guard during their attempted meeting and barely escaped with their lives. If the Warden is a Human Noble, it is possible to exclaim that this is their family. Avernus will then dryly inform the Warden that they lost many relatives that day and that he saw the head of Teyrn Cousland "on a table, with an apple in his mouth." Apparently Arland decided to butcher as many Couslands as necessary to ensure the remainder would stay in line.

If the Warden allows Levi to question Avernus about Sophia Dryden, he will express his belief that (prior to her possession, at least) she was the very best of the Wardens, and a hero, but that there is unfortunately no proof to be found that could help clear his family's name. He also reveals that it was he who originally called Levi to the fortress in the first place (though he wasn't aware of Levi's heritage as a Dryden) in order to attract the necessary reinforcements to finally break the 200 year deadlock.

As rumors of the events in Soldier's Peak and the fate of Avernus begin to surface after the Blight, the Grey Wardens chose to remain silent about the matter.[1]

If Avernus survived the Fifth Blight and was allowed to continue his research:


If Avernus was allowed to continue his research, a dead messenger can be found on the Wounded Coast with a mysterious vial based on Avernus's research and a message from Avernus himself for the Grey Wardens. The effects of the potion will be the same regardless of Avernus's research being ethical or not, although Avernus' message will be different.

This section contains spoilers for:
Dragon Age: Inquisition.
If The Warden is alive by the time the events of Inquisition take place, Avernus' experimentation to prolong his life to unnatural lengths will be mentioned by either a romanced Morrigan, Leliana, or a Grey Warden Alistair, as one of the precedents that inspired the Warden to search a way to prevent the Calling.

If the party did not kill Sophia and you side with Avernus against her, he may cast fireballs, which will badly injure your party; he will then take you to seal the Veil immediately, so prepare potions to survive the fight.

Each time Avernus transits to a different map, you can Steal from him again. 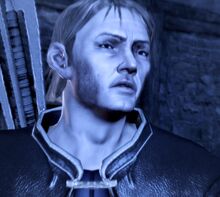 Young Avernus seen in one of the flashbacks 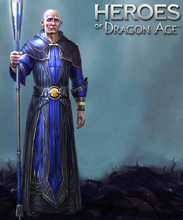 Retrieved from "https://dragonage.fandom.com/wiki/Avernus?oldid=871117"
Community content is available under CC-BY-SA unless otherwise noted.