watch 03:03
The Loop (Games)
Do you like this video?
“Protect what matters with everything you have, or you'll have nothing, and deserve it.”

Soldier
Guardswoman
Captain of the Guard

Aveline Vallen (née du Lac, potentially Hendyr) is a human warrior. She was fleeing Ostagar with her husband Ser Wesley during the Fifth Blight when they were set upon by darkspawn and rescued by Hawke and their family. Aveline is the first companion Hawke encounters besides their siblings.

"Aveline Vallen is a soldier, a master of sword and shield, and a tireless guardian... to a point. The daughter of an exiled chevalier, Aveline is not the knight her father wished her to be. Although fully trained in chivalrous combat, she was raised in the shadow of a lost life and will not lose another for the sake of honor. Protecting her adopted home of Kirkwall becomes a chosen duty, not a privileged calling. The people she stands for will not be wasted on lost causes or protecting the foolish from themselves. Pride can be bandaged like any other wound—when threats are dead and everyone is safely home."[1]

Aveline is the daughter of a chevalier named Benoit du Lac, who fled from Orlais to Ferelden after losing his patron to assassination. Raising her on stories of knights and adventures, he hoped Aveline would be a knight, even naming her after Ser Aveline, the Knight of Orlais. He eventually sold everything he had to sponsor her into King Cailan Theirin's service.

Aveline met and married Wesley Vallen while in the Fereldan army, where she was an officer. Her company was part of the first charge. However, Loghain's betrayal at the Battle of Ostagar forced them to flee the darkspawn horde. She ordered a scattered retreat and told her people to make their way home.[2] She and Wesley eventually made their way to Lothering's outskirts, where they met Hawke.

Hawke saves Aveline and her husband, Ser Wesley, from imminent death while escaping Lothering. When Flemeth indicates Wesley will die of the darkspawn taint, either Hawke or Aveline delivers a mercy blow to him. Wesley's death leaves Aveline with few options, and she accompanies the Hawke family to Kirkwall.

Upon arriving at Kirkwall, the group finds the guards must be bribed in order for them to enter the city. Hawke's uncle provides contacts who can help them, in exchange for mercenary services from the Hawkes through the next year. With no other options, Aveline assists the Hawkes in entering the city; if Hawke chooses to help Athenril in dealing with Cavril, the merchant's cheating ways incense Aveline, and she deals with him very effectively.

After entering the city, Aveline joins the Kirkwall City Guard to make a living. If Hawke aids her in her companion quest, The Way It Should Be, Aveline and Hawke will uncover a conspiracy involving Jeven, the current Captain of the City Guard, and the Coterie. Hawke and Aveline discover that Jeven has been sending guardsmen on dangerous patrols with a satchel of valuable city information in order to sacrifice them to the Coterie so that the thieves could obtain the information with out looking suspicious. When Jeven's scheme is revealed to the authorities, Jeven will be arrested by his own guardsmen and Aveline will replace him as the new Captain of the Guard for her role in ending Jeven's corruption. Aveline will still be the Captain of the Guard, though considered "interim", if Hawke does not aid her in her companion quest since the previous captain left suddenly and Aveline with her previous military experience made her the most viable replacement. Aveline's guard and Guard-Captain positions allows her to deal with certain people effectively, namely other guards and scoundrels.

When Hawke visits Aveline three years later and her companion quest, The Way It Should Be, was completed, she warns Hawke that their new found wealth and influence has changed the fortunes of many people in Kirkwall; and not always for the better. When asked how she was settling into her new position as Guard Captain, Aveline complains that they are spread thin and how the templars are unwilling to requisition a few of their men to fight for the city guard as it was considered "demeaning". Even so, many of the guardsmen seem to have rallied under her leadership. If her companion quest was not completed, she states that the previous captain left suddenly, and she now realizes why running the guard is so difficult. The viscount is weak and is unwilling to commit the resources she needs for the city guard. Not only because her position is only "interim", but also because he fears it would upset the templars. If Hawke encourages her to just leave the guard and work for them, she says that she knows the type of trouble Hawke gets into and that a casual relationship with them suits her just fine.

Hawke can also assist Aveline in her relationship with Guardsman Donnic Hendyr; if helped, she marries him at the Hawke Estate. If not, Aveline remains single.

If brought into the Fade during Night Terrors, the desire demon will succeed in turning Aveline against Hawke by using her memory of Wesley; after returning from the Fade, Aveline confesses her worries in Doubts that Linger.

If brought along, Aveline disapproves of accusing Grand Cleric Elthina of wrongdoing in Offered and Lost.

Like other companions, Aveline has a gift, The Shield of the Knight Herself. Regardless of what Hawke has done with Ser Wesley's Shield, Aveline will complain about having to replace it when she is presented with the new shield. To avoid rivalry points, Hawke must explain that the shield is a gift for a friend or take it back.

Aveline will attempt to console Hawke for their mother's death in The Captain's Condolences. Hawke can assure her they're fine or confide their sorrow to her for friendship points. In seeking to comfort Hawke, Aveline offers to tell a story about her father. Hawke can also blame Aveline for Leandra's death for rivalry points.

In the quest Demands of The Qun, Aveline enlists Hawke's aid in trying to arrest two fugitive elves who murdered a city guardsman for raping their sister but have been granted religious sanctuary in the Qunari Compound for converting to the Qun. The Arishok takes offense to the attempted arrest of his new converts and counterattacks, marshaling his forces to conquer the city and convert it to the Qun.

When Hawke visits Aveline three years after the Qunari attack, she states that with out a viscount, the templars have been trying to influence the city guard more.

Aveline can meet Jeven again in her companion quest, Favor and Fault. Since his fall from grace, Jeven has taken up with base types who hold prejudiced views against Fereldans like Aveline and Hawke. He became the leader of a dangerous group of insurgents who attempted to have Captain Aveline expelled by forcing anonymous complaints that she was coddling her men. Jeven even attempted to coax guards into joining his cause. In addition to getting revenge for his arrest at Aveline's hands if Aveline's first companion quest was completed, the scheme was intended to reduce what Jeven saw as excessive Fereldan influence in Kirkwall, though the plan backfired when Captain Aveline confronted him in the sewers of Kirkwall. He was killed after attacking Aveline.

Aveline's attitude towards her position as Guard-Captain depends on Hawke's friendship or rivalry status. If Aveline has a friendship status, she is proud of her efforts in reforming the Kirkwall City Guard and is thankful to Hawke for encouraging her. If rivalry, Aveline becomes disillusioned with her efforts as Guard-Captain and is plagued with doubts. If some of her guardsmen were killed in Jeven's attempted insurrection she may even consider resigning from her position.

However, Aveline initially refuses to support Hawke who sided with the mages if her Act 3 quest Questioning Beliefs has not been completed and Hawke has 100% friendship or rivalry with Fenris and has completed his last personal quest. Later Hawke meets Aveline in the Gallows courtyard. Hawke can still convince Aveline to join the party at this point. Otherwise Aveline walks away and then shows up inside the Gallows with a group of city guards. She refuses to fight Hawke in battle because she owes her life to Hawke. Instead, she angrily leaves stating that she wants nothing to do with Hawke anymore.

If Aveline decides to help Hawke side with the mages, and has been married to Donnic, Donnic will order the city guard to protect the civilians, keeping them out of the fight. If Aveline did not marry Donnic and decides to help the mages, the guards will participate in the fight, and Aveline will blame Hawke for their deaths.

The Inquisitor can ask Varric Tethras about her fate. Varric will state that she is still Guard-Captain and is responsible for a lot of Kirkwall's stability.

Sebastian Vael recruited by Hawke, Anders survived, and the Inquisitor accepts Sebastian's offer of friendship:
Sebastian Vael reclaims his title as Prince and later leads an invasion of Kirkwall. In the mission Annexing Kirkwall, Sebastian requests support from the Inquisition in helping him suppress the city's resistance forces led by Guard-Captain Aveline Vallen and hunt down Anders' associates. The Inquisitor can choose to send Leliana's agents to bolster Sebastian's forces and strong-arm Aveline to back down or send Cullen's military to bolster Aveline's resistance forces and repel Sebastian's occupation forces back to Starkhaven.

Provided that the Inquisitor looks into Varric's issues that correspond to the war table, and opts to send Cullen to deal with the developing problems of her former comrade, Aveline is involved with the Hard In Hightown series of war table mission chains. She keeps regular correspondence with members of the Inquisition, sending letters to Varric, and at the completion of the mission chain, provided that Commander Cullen's troops were part of the operation, she sends along a message commenting about the events that have occured and tells Varric that he owes her.

Through never directly mentioned in Trepasser DLC, Aveline is seen in Varric's epilogue picture, smiling, implying she is still the Guard Captain of Kirkwall.

Aveline is a kind and moral person who respects authority and values friendship and family. Friendship is earned when Hawke acts lawfully and helps those in need. She is not unreasonable, however, and will occasionally favor bending the law in order to help her friends (especially Isabela).

Rivalry with Aveline is earned when Hawke ignores people in need, takes illegal or seedy jobs, or takes jobs solely for personal profit.

A Friend in the Guard

The Way It Should Be

Calling on the Captain

The Shield of the Knight Herself (gift)

Aveline's armor upgrades can be found in the following locations:

Aveline's armor changes from Modified Officers' Issue to Guardsman Plate and Chain after Hawke's first year in Kirkwall. When Aveline becomes the new guard captain (whether The Way It Should Be is completed or not) her armor changes to Guard-Captain's Ranked Plate, reflecting her new role.

Shield of the Knight Herself

Signet of the Red – requires Mark of the Assassin DLC

Early photo of Aveline fighting a pair of hurlocks 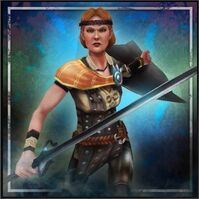 Promotional image of Aveline in Heroes of Dragon Age

Tier progression of Aveline Vallen in Heroes of Dragon Age

Cover of Swords and Shields by Varric (Character Looks like Aveline) 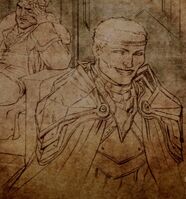 Retrieved from "https://dragonage.fandom.com/wiki/Aveline_Vallen?oldid=780511"
Community content is available under CC-BY-SA unless otherwise noted.