Dragon Age Wiki
Register
Don't have an account?
Sign In
in: Locations, Seheron, Dragon Age: Until We Sleep locations,
and 2 more
English

Dragon Age: Until We Sleep

Ath Velanis is a fortress in Seheron, under the control of Magister Aurelian Titus and his cult.

When Ath Velanis was built, it was used by Malgorthios the Black in order to sacrifice women screaming to the Old Gods.

Centuries later, this fortress housed madmen, demons and the Fraternity of the Grinning Abomination.

Eventually, it fell into ruin until Aurelian Titus chose it as his headquarters. In addition to its strategic value, the fortress also serves as a place where prisoners are held as well where magical experiments take place.

The plot follows BioWare's own canon, meaning that Alistair is king of Ferelden in the comic's story.
The Qunari assault Ath Velanis at the command of their new Arishok, led by Alistair and Isabela as they confront Aurelian Titus. Meanwhile Varric infiltrates the fortress undetected and searches for Maric Theirin. While there he liberates Maevaris Tilani who had been taken prisoner. 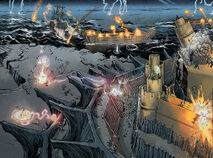 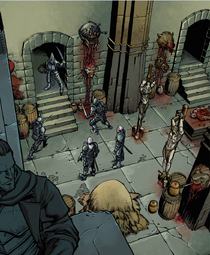