Anyone can kill for money, but those who follow the Antivan traditions know how to do so with style. While every assassin is different, some favoring up close and personal kills and others striking at range, they are all deadly predators and skilled at exploiting their foe's weaknesses. There are a surprisingly large number of assassins at work in Kirkwall, though most are away on contract at any given time.

Assassin is one of the specializations available to the rogue class in Dragon Age II.

Assassins do not simply end lives. Anyone can kill. Accidents can kill. But sometimes it's not just the death that matters—it's the means and the message. Assassins remove problems with surgical precision as efficiently as possible. They hit where and when it hurts most, exposing vulnerabilities that allow others to do the same. For the Assassin, cold calculation matters more than raw speed or ferocity, and each victory can improve the odds of success in the next. This specialization has been raised to an art form in Antiva, but its raw utility has ensured that it knows no borders. Where there are people, there are both clients and targets.[1] 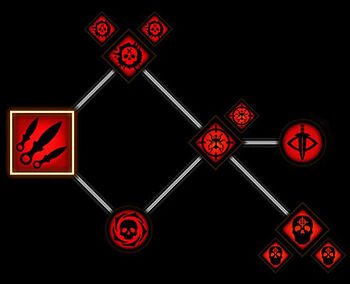 Assassins, more so than any other class, are focused on obscene damage in an extremely short timeframe. This makes them extremely adept at taking out a single, powerful enemy quickly (Such as a leader or boss), but they will tend to be less effective against swarms of lesser enemies than other classes. Another unfortunate side effect of that damage is that it tends to draw the attention of enemies, while the assassin is limited in defense.

When facing a tougher enemy, throwing the Mark of Death ability will allow teammates to begin tearing into them. Follow up with the Pinpoint Strikes ability to boost damage output significantly for a while (As it guarantees a Critical strike while active). Finally, use the Assassinate ability to deplete a substantial portion of their health, if not kill them outright. Against multiple lesser enemies, using Pinpoint Strikes can allow the player to kill enemies much quicker, but be aware that they will attract more attention from the damage dealt. Another smaller point is that the Assassination ability will cause the player to backflip away from the target, which can be useful for bow-users.

Retrieved from "https://dragonage.fandom.com/wiki/Assassin_(Dragon_Age_II)?oldid=700587"
Community content is available under CC-BY-SA unless otherwise noted.