The Ash Warriors are an elite and renowned unit of Fereldan fighters who use vicious mabari war dogs in battle. According to the legend their training is considered to descend from the dwarven berserkers, and particularly Luthias Dwarfson. They are pious mercenaries who work for no pay, instead working for whatever cause they deem just. They are so admired by common Fereldans that wherever they go, they are treated as heroes.[1]

The Ash Warriors' training has, according to the Ash Warriors, been passed down since Luthias the Dwarfson, a Clayne warrior who first harnessed the battle-rage of the dwarves after being trained by his wife, Scaea.[5] Ash Warriors harness the battle rage inside, nurture it, and draw it out so they cannot fall in battle until their last foe is slain.

In -355 Ancient[7] the Battle of Red Falls occurred. This was last great battle between the Alamarri with their legendary leader Luthias Dwarfson and the Avvar with their warrior queen Morrighan'nan. Even though he was thought to be unbeatable, he and Morrighan'nan slew each other. The Ash Warriors were founded shortly after his death in order to honour his memory.[8]

Some time before or during the Blessed Age, the Ash Warriors were led by a man named Gelgenig who received a vision of Andraste while the Alamarri warred with the Avvars and Chasind over land.[9] He then helped spread the faith of the Maker and helped unify the religion where Andraste could not, and ever since the Ash Warriors have been fierce adherents. However, this is not to say they are a part of the Chantry, as they predated its formation and do not practice the Chant of Light.

Ash Warriors in the past once stood with King Calenhad when he was uniting Ferelden, and still remain "king's men."[10] 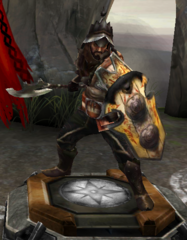 An Ash Warrior in Heroes of Dragon Age.