The Arl of Denerim's Estate is the large residence of the current Arl of Denerim and the seat of the Kendells family. After Arl Urien's death in battle and the uprising in the Alienage, the Estate and the arling of Denerim were granted to the Howe family.

Marjolaine sent Leliana, Tug and Sketch to the estate in order to deliver Orlesian military documents she obtained, to her new ally Harwen Raleigh, who was guarding the estate in the Arl's absence. When Leliana objected, Marjolaine permitted her to return to the estate, thinking they would retrieve the papers but instead Marjolaine attacked them and handed them over to Raleigh.

This section contains spoilers for:
Dragon Age: Origins.
After Vaughan, the son of Arl Urien, and his men crash the Elven wedding celebration, the women are taken here. If the City Elf Warden is male, he and Soris will go to the estate to attempt a rescue. Female Wardens will have fight their way to Vaughan after Soris and Nelaros force or sneak their way into the estate.

During Rescue the Queen, as the Warden arrives at the exterior of the estate of Denerim, they find the doors to the estate locked, guards blocking the way, and a large crowd outside complaining about the Arl.

Erlina will follow the Warden after a short dialog up to the moment where she offers to distract the guards. Whether or not you take up her offer afterward, she will remain outside. If the party is disguised and inside, she will join them again and warn them to attempt to blend in. Accepting the disguise will yield Codex entry: Disguised!.

A Day for Celebration

See City Elf Origin for characters that can be found at this location during the origin story.

Note: When The Warden isn't wearing a disguise these will all be hostile from the start.

Heirloom Necklace - from a locked chest in one of the bedrooms

Note: Vaughan's Lockbox Optional, whenever you choose to free Vaughan for a price, he will give you his key to this lockbox. (With sufficient Coercion, you can get him to give you the key and then choose not to release him.) Containing 40 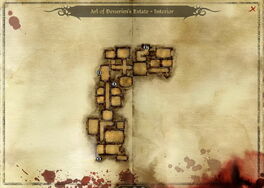 Map of the Estate Interior 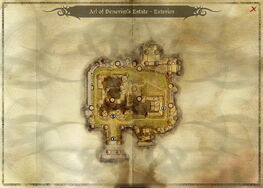 Map of the Estate Exterior 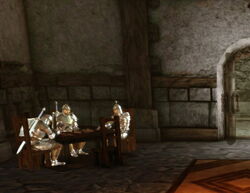 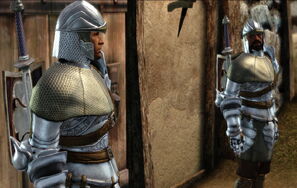 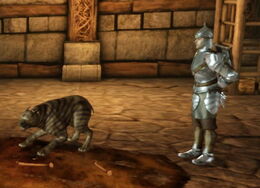 Guard Dog
Add a photo to this gallery
Retrieved from "https://dragonage.fandom.com/wiki/Arl_of_Denerim%27s_Estate?oldid=880173"
Community content is available under CC-BY-SA unless otherwise noted.