For the title, see Arishok (title).

“Fixing your mess is not the demand of the Qun! And you should all be grateful!”

The Arishok is the commander, and de facto spiritual leader of the Qunari expedition in the city of Kirkwall. He became stranded in Kirkwall after a storm destroyed his fleet off the southern coast of the Free Marches. He presently resides in the Qunari Compound on the city Docks.

The Arishok is the leader and highest ranking general of the Antaam, the military branch of Qunari civilization. He also serves on the Triumvirate and represents the "body" of Qunari society.

Previously, the Arishok served as Kithshok and commander of the garrison at the fortress of Alam. He was considered a significant threat to the Tevinter Imperium's campaign to seize Seheron and developed a reputation for sometimes inspired but incredibly high-risk battle tactics eventually earning him a nickname amongst the Tevinter; 'The Mad Ox".

In 9:25 Dragon, the previous Arishok died from wounds sustained in Seheron and the Tamassrans began a series of tests to determine a suitable replacement, eventually choosing the Kithshok and elevating him to the rank of Arishok. The Imperium immediately dispatched a dozen assassins, possibly at the command of the Archon himself. Only two made it past the Ben-Hassrath into the city of Qunandar on Par Vollen; the Arishok killed them both himself.[1]

As the Fifth Blight began, the Arishok sent Sten and the rest of his Beresaad unit to Ferelden. Their task was to answer a question for the Arishok; "What is the Blight?"

In 9:31, The Arishok and the Antaam were sent out to meet Orlesian forces who agreed to return the Tome of Koslun on a diplomatic exchange. The exchange was instead interrupted by the Rivaini pirate Isabela, who stole the Tome for her patron, Castillon. The Arishok led the Qunari forces to pursue Isabela across the sea in an attempt to recover the stolen Tome. During their sea battle, Isabela's ship was sunk by the Arishok's forces, while a storm shipwrecked the Arishok, stranding both parties in Kirkwall. The Arishok and his forces then set up a base in the docks of the city lent to them by Viscount Marlowe Dumar as a peace offering.

During Act 1, a dwarven merchant named Javaris Tintop sought to buy the formula to create gaatlok, a Qunari explosive powder, from the Arishok, but was refused. As a result, Javaris attempted to broker a deal with the Arishok to slay Tal'vashoth in exchange for the formula, and hired Hawke to do the job for him. When he returned to the Arishok, the Arishok refused him again, stating first that the Qunari had never agreed to the deal and second that Javaris had not done anything; it was Hawke who had done the deeds. Later, the Arishok dispatched warriors led by an arvaarad in search of a saarebas. The saarebas' karataam had been slain by Tal'vashoth, and according to the Qun, he had to be killed, as he had existed for a time without oversight. The karataam encountered Hawke, who had been leading the saarebas at the behest of sister Petrice - she had hoped to have the Qunari kill Hawke and her friends, allowing for an excuse to lead an insurrection against the Qunari. However, they were all killed by Hawke, but the saarebas died as well. When the Arishok learned of this, he stated simply that Hawke's actions were impressive, and the important thing was that the saarebas had been slain. When informed that a sister was attempting to cause conflict between him and the city, he was unconcerned as well.

By Act 2, tensions began to grow between religious factions, as some citizens of Kirkwall began to convert to the Qun. The Arishok himself had long been irritated with his perception of chaos and corruption rampant in the city, and had even mentioned to Hawke that the Qun might eventually demand that he step in to "enlighten" the people of Kirkwall. In Blackpowder Courtesy, the Arishok requests Hawke's presence. When Hawke arrives, the Arishok informs them that someone has stolen the formula for saar-qamek, a poison gas that drives non-Qunari insane before killing them. The culprit had been attempting to steal the formula for gaatlok, but the formulas were switched in order to lure the Qunari's enemies out of hiding; the Arishok suspected that it was Javaris, since he was the only person who had attempted to buy gaatlok and had not accepted "no" for an answer. Hawke eventually discovered the culprit was a deranged elf who hated the Qunari for converting her siblings, claiming elves were losing even more of their culture. When brought to the attention of the Arishok, he was unconcerned, stating that their enemies were too cowardly to outwardly confront the Qunari and that his task was not to convert the city.

Eventually, the Arishok was provoked to the point of retaliation when three events occurred that he could not ignore. Saemus Dumar, son of the Viscount, converted to the Qun and was murdered by mother Petrice, who had set up Hawke long ago. At the same time, the city guard began petitioning the Qunari to extradite two elves who murdered a corrupt city guard and converted immediately after, claiming religious sanctuary with the Arishok. Finally, and most importantly to the Arishok, the Tome of Koslun was stolen once again by Isabela as his warriors attempted to recover it. The Arishok concluded simply that he could not stay in Kirkwall any longer and ignore the corruption and disease of the city, but he also could not leave without the Tome. As such, he chose to correct the corruption, and ordered a Qunari attack on the city, attempting to capture Hawke and/or kill Aveline as they attempted to negotiate with him. The Qunari easily overcame the city guard and seized the keep, which left only Hawke and their party, the Templar Order (led by Knight-Commander Meredith Stannard), and a few members of the Circle of Magi (led by First Enchanter Orsino) to oppose him.

As Hawke entered the throne room, it was revealed that The Arishok had executed Viscount Dumar, as well as gathered all the nobles of the city, threatening them with the same fate if they offered resistance.

The following outcomes are possible:

Hawke can choose to duel the Arishok to the death if 1. Isabela came back or 2. Hawke brought Fenris with them or 3. Hawke has earned the Arishok's respect. If Hawke refuses to duel him or is not offered a duel, they will instead fight the Arishok and all surrounding Qunari with the entire party (and Isabela will join in if she is there). Regardless of the outcome, all remaining Qunari leave Kirkwall with the Arishok vowing his people's return.

Dragon Age: Those Who Speak[]

The plot follows BioWare's own canon, meaning it may not follow some of the player's choices in the games.
Sten - who accompanied the Warden during the blight - was made Arishok, after his predecessor fell in battle (against Hawke) attempting to invade Kirkwall.

If Hawke gave Isabela to the Arishok:
According to Varric Tethras, the Arishok lost the Tome of Koslun again, along with the thief. He returned to Par Vollen to find the Qunari equivalent of a court-martial waiting for him. He was replaced by a new Arishok.

If the Arishok was slain by Hawke:
The Inquisitor can accuse Varric of making up Hawke's battle with the Arishok, claiming that the Qunari would have seen the Arishok's death as an act of war. Varric explains that, because the Arishok's invasion of Kirkwall was unauthorized, the Qunari denounced his actions. Sometime after the death of Meredith, the Qunari silently reclaimed the remains of the Arishok's dreadnought and agreed to "never speak of this again", which Varric claims is the closest thing to an apology the Qunari will ever give for the Arishok's actions.

In the aftermath of the Qunari attack on Kirkwall, in an unprecedented public display, the two remaining members of the Qunari ruling body traveled to Kont-aar, the only Qunari settlement on mainland Thedas, and made a public statement denouncing and disavowing the Arishok's attack on the city before a crowd of Chantry officials, diplomats and Rivaini seers.[1]

To Catch a Thief

Being honest and agreeable with The Arishok earns his respect. When it is high enough, the player will obtain the achievement A Worthy Rival, and be able to persuade him to duel you during the Demands of the Qun quest regardless of Isabela's actions, and without Fenris in the group.

See Arishok (strategy) for class-specific strategies for the duel.

The duel may take a very long time, as the Arishok has a large supply of health potions and powerful knockdown attacks that must be continuously dodged. The group fight is much easier, as you can use cross-class combos to deal with the Arishok once his guards are killed. 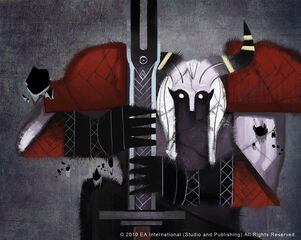 Tier progression of the Arishok in Heroes of Dragon Age