Edit
watch 02:05
Wiki Targeted (Games)
Do you like this video?
Play Sound
“No pestilent hate could turn aside Tevinter's ferryman...
—Canticle of Silence 3:18”

The Archon, officially the Imperial Archon, is the mage-ruler of the Tevinter Imperium. The position is usually inherited, whether through blood relation or apprenticeship of the previous Archon, but the Magisterium, the legislative body of Tevinter, has the power to elect the Archon should the need arise.[1] Most notably, this is done in the event that an Archon passes without an appointed heir.[2]

In ancient times, when the Imperium had expanded into most of Thedas, the one who held this office was de facto the most powerful person in the continent.

One third of the Archons throughout history have been Laetans.[3] Archon Tidarion was the first Laetan to become Archon, and the outrage that this caused among the Magisterium led to a civil war that lasted over seventy years. The magisters believed that magic was a favor of the Old Gods rather than an accident of birth, and refused to acknowledge the mage underclass of elves and newly liberated foreigners. The civil war was only ended in -620 Ancient when Archon Parthenius, former high priest of Dumat, finally admitted the Laetans to the temples and gave them three seats in the Magisterium.[4]

Archons are technically part of the magisters and used to be elected from the ranks of the Magisterium but since the Black Age this practice changed and no member of the Imperial Chantry or a magister can become an Archon.[2]

The seal of the Archon is a hooded ferryman.[5]

Archons technically have the power to overrule laws passed by the Magisterium, but this power is exercised rarely. The Archon's most coveted power is the ability to appoint new magisters, so the ruling families actively vie for his or her favour.[6]

Archons not placed in chronology[]

Codex entry: Archons of the Imperium

Codex entry: Ring of the Ferryman 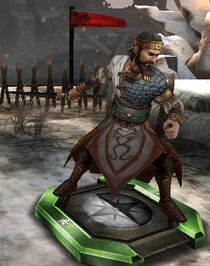 An Archon in Heroes of Dragon Age