An Arcane horror is created when a pride demon takes control of a mage corpse. Although they appear to be little more than bones, these are fierce creatures, possessing not only all the spellcasting abilities of a living mage, but also the capacity to heal and even command other animated corpses.[1]

- Several Twisted Sentinel Arcane Horrors are encountered in-between the Veil. One of these is Boss rank while the others are Elites. These are only encountered in The Golems of Amgarrak DLC.

Arcane horrors have three types and one unique boss, and like party members have conditions for Combat Tactics:

Arcane horrors are easily killed, but have very high damage output. When they are immediately attacked, they are easily dispatched, but left alone they will devastate a party. It is a good idea to ignore other enemies and attack the arcane horror first.

In a party with ranged attacks, it's possible to kill the demon without it even damaging the party. In a party with a mage, using spells that drain mana like Mana Cleanse, Mana Clash, or Mana Drain can severely inhibit the arcane horror, especially when used in the improved drain Spell Combo.

When fighting the arcane horror in the Werewolf Lair, it is easy to kill it swiftly if you can get all party members a ranged weapon (either a bow or a staff), and keep them on the stairs above the arcane horror. Make sure to have hold position on however.

In the sequel, the arcane horror is every bit as dangerous, if not more.

On the attack, it has three spells with short cooldowns. Against characters who are clustered together, it will use an area of effect spell that damages and stuns everyone. On Hard and Nightmare it deals enough damage to kill even tanks at over 95% magic resistance in a single cast, making killing the arcane horror a priority. Since you are stunned you don't get the chance to move out of the area, so it is advised to keep your party spread out so that it can not kill more than person at once.

If melee attackers are sent against it, the arcane horror will launch a spell that emits a very bright blue light and does massive spirit damage that can easily take down a tank in mere seconds. Unless your characters have heavy spirit resistance such as that afforded by a Rune of Spirit Warding, they should use this opportunity to flee. One positive side effect of this is that while this counter-melee spell is active, the arcane horror is immobilized so ranged characters can get some free shots at it. This spell can be cancelled by casting Dispel Magic on the arcane horror.

Lastly, it will sometimes use a knockback spell that sends a member of your team (typically a mage) flying, but does very little damage. Fortunately, all three spells require two or three seconds to activate: this is represented visually by the arcane horror spinning its arms. This gives the player a very short but crucial window to interrupt its spellcasting using certain abilities and spells, e.g. Winter Grasp or Pinning Shot.

To fight an arcane horror, one tactic is to try to make it Brittle (since it has low physical resistance) and thus vulnerable to follow up with Archer's Lance.

If you play as a mage, one simple tactic is to have a party of Varric, Merrill and Fenris. Lock the party's position at the bend below the clearing where the arcane horror waits. Select Fenris and run up the path to lure the arcane horror to the upper bend and then run back down. Your party will automatically attack. The arcane horror will then teleport back to its original position. Lure it again and auto attack. When the shades appear, lure them and attack them as they move down the path.

Lure the arcane horror as many times as needed, though 3-4 times should be enough before it dies. If done right, no party member will die, or even need healing.

The Arcane Horror's most dangerous ability is it's barrage of spiraling, green spirit energy. A full volley if this can easily kill a non-tank party member. Survive it by using Spirit Resistance Potions. Evading it is often difficult, but possible. it will also teleport itself frequently. 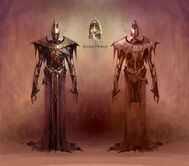 An Arcane Horror in Heroes of Dragon Age

An Arcane Horror in Dragon Age: Inquisition
Add a photo to this gallery

Retrieved from "https://dragonage.fandom.com/wiki/Arcane_horror?oldid=699615"
Community content is available under CC-BY-SA unless otherwise noted.