Among the ancient elves, there were mages who trained their magical arts to augment their martial prowess. They channeled magical power through their weapons and bodies, becoming terrors on the battlefield. Most consider these skills lost forever, but they may still linger in forgotten corners of the world. Arcane warriors may learn to use their magic score to satisfy the strength requirement to equip higher-level weapons and armor.

The Arcane Warriors once widely existed amongst the ancient Elves. However, after their fall, the art of the Arcane Warriors is seemingly all but lost. This is also a specialization of the mage class in Dragon Age: Origins.

According to Solas, the Arcane Warriors were elven elite guardsmen serving as bodyguards or champions for ancient elven nobles. The formal name of their techniques is Dirth'ena Enasalin, knowledge that led to victory. Mages who eschewed physical confrontation called it Ghilan'him Banal'vhen, the path that leads astray. Mages who focused on spirits or the Fade might sneer at their physicality but never doubted their honor. They were the willing embodiment of will made manifest - mind shaping the body into the perfect weapon. Knight-Enchanters use techniques derived from those used by Arcane Warriors.

This specialization can be unlocked while doing the Nature of the Beast quest line. It is located in the Lower Ruins of the Brecilian Ruins. In the north-east corner of the map, just south of the Elven Burial Chamber, the corridor forks east and west into dead ends. The room is in the dead end to the west.

Inside a small chamber which looks like a ruined library, there is a Broken Stone Altar. The phylactery is hidden in the far right corner of the room, beside the headless statue holding a shield. (It is not automatically highlighted, so for xbox360

use the left trigger, for ps3

use L2 and for pc

use TAB to highlight all the items in the room.)

In order to unlock the specialization, interact with the phylactery.

An Arcane Warrior gives flexibility to the mage and the party and allows the mage to equip most armor and weapons. Trading off on fatigue and mana managing allows the mage to be played as a hybrid weapon user and armored mage. The mage can use sustained abilities to get very high levels of defense/armor/spell resistance, but at a heavy mana cost. This and high fatigue limit how many spells your character can use. Note that fatigue penalties also cause potions to become less useful. With equipment and attributes placed accordingly, an Arcane Warrior can mimic a Warrior or Rogue in base damage with auto attack but with mage abilities and spells. See Arcane Warrior spellcasting for a complete list of spells that can be cast with a sword in hand.

Play styles for Arcane Warriors: Damager/Nuker, Defender/Tank, & Healer/Supporter, further customizations are referred to as Hybrids. Many recommendations on how to play an Arcane Warrior can be overwhelming but it is key to understand all mage Spells. Knowing how combinations work and what does not work together will give you an advantage.

A damager can be either melee with casting or casting with a staff. If you are going to use your Arcane warrior as dps, be sure to combine it with a better suited damage dealing specialization. The upside is that you can now equip your mage with some of the game's strongest weapons for melee damage, and still be able to throw the occasional spell in to soften up enemies.

Arcane Warriors can be setup to tank with the ability to wear heavy armor and manage fatigue makes this caster extremely tough, at the expense of a weaker mana pool. One can take advantage of the specialization's strong defensive spells in conjunction with regular defensive mage spells. By activating Shimmering Shield, Rock Armor, Combat Magic, Arcane Shield, Miasma and other buffs, you can make an arcane warrior tougher than any class in the game. Be sure to enhance your Arcane Warrior's mana rate with proper gear and keep in mind that gear with stamina regeneration buffs also apply as mana for Arcane Warriors.

By using your Arcane Warrior as a healer, you give your party a huge boost in survivability. Most of the time you have to manage aggro carefully with the warriors so that your fragile healer isn't instantly torn to pieces, but by using the heavy armor available to this specialization you can give your healer a huge buffer to damage. This means that a sneak attack by some shrieks on your mage is no longer a dealbreaker on harder difficulties.

Hybrids are variations of play style, gear, attribute placement and role in the party. This is also what is considered when picking up a second or third specialization.

With other Specializations[edit | edit source]

Blood Mage can help to offset the disadvantages of a low mana pool at the cost of health by allowing the Arcane Warrior to cast spells using health as mana. A reasonable amount of constitution would be highly recommended with this specialization combination. The effective Blood Wound spell can also be acquired, which is an ideal choice for both a more offensive Arcane Warrior and a tank drawing Threat.

Spirit Healer produces a mixed character with offensive and defensive magic and good durability. This combination works best with light and medium armor, since a decent amount of mana is needed to power the high-level healing spells.

Shapeshifter possesses a fair bit of redundant overlap with tree, as they both offer exclusive options in melee, but a foremost Shapeshifter with secondary Arcane Warrior can use massive armor and Bear Shape and be incredibly hard to kill with weapons. The main problem with this is the fact that Shapeshifter overall does very poor damage because of the fact that, unlike what the tooltip for Shapeshifter says, it does not actually use magic to calculate damage.

Battlemage is an especially potent option as you can use the sustained and activated spells from the Battle Mage with the Arcane Warrior's ability to wear heavy and massive armor. This has drawbacks however, mana managing is even more intense and limits your use of sustained and activated spells. However, with good spell combinations can be very effective in damage and threat.

Another tactic with the battlemage specialisation would be to wear robes instead of heavy and light armour, and use arcane warrior to gain access to high tier close range weapons; this allows your mage to take full advantage of spells like Elemental Chaos and Arcane Field. However, if you still want your mage to pump out weapon damage, it is almost crucial that you activate Combat Magic making an extremely high fatigue, this can be lowered with equipment with the - fatigue enchantment and runes, or it can be countered late game with pumping four skill points into the clarity tree and putting a majority of your points in willpower (in some cases more than magic, depending on how many activated spells your mage will use). It should be noted that this tactic will leave your mage with little armour or defence, so you should consider putting a fair amount of points into constitution if your tank and healer can't cope with keeping your battlemage from being overwhelmed (20-30 should be enough).

Keeper is an area of effect and crowd control specialization with a passive health regeneration ability. This can be very useful for any play style. This can be a high threat combination and with the draw back of rooting with One With Nature and may want to be a third specialization.

There is only one arcane warrior specialization specific item in the game:

A Tevinter Arcane Warrior in Heroes of Dragon Age 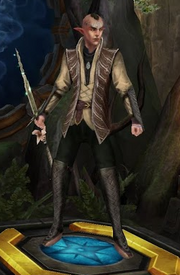 Retrieved from "https://dragonage.fandom.com/wiki/Arcane_Warrior?oldid=891533"
Community content is available under CC-BY-SA unless otherwise noted.