The Antivan Crows, also known as House of Crows, are an elite organization of thieves, spies, and assassins which are renowned throughout Thedas.

The Crows started as an arm of the Chantry. In the hills north of Treviso, an order of monks used the herbs grown in the gardens of their abbey to assassinate a despotic duke.[1][2] Since then, through their deadly reputation and exotic poisons, the Crows have practically come to rule their homeland. Though honor among such an organization is generally dubious, they do adhere to one standard: contracts are met and agreements are kept. Failure to eliminate a mark means the life of the operative is also forfeit. The Antivan Crows are a driving political force in Antiva, often hired to assassinate Antivan nobility or even royalty. Their reputation is enough to deter many nations from openly attacking Antiva despite its lack of a standing army.[3] Zevran implies the Crows are an important part of Antivan society as a whole.

When the Crows are hired for a job, generally one master handles the contract. However, if the master is unable to complete it, then other masters can be hired. It is even possible to hire the entire House of Crows, however that would be extremely expensive. There is only one known case where this occurred.[4]

The Crows run Velabanchel, an infamous and feared prison where they keep people incarcerated for "fun and torture." Its reputation has earned it the nickname of "the House of Graves."

Past contracts, blackmail materials and secret histories are kept in the Archive of the Crows in Antiva City. Several of their assassinations have become notorious.

In 3:09 Towers, Knight-Commander Gervasio of Antiva invoked the Right of Annulment on the Circle of Magi and killed all of the city's mages for demonic possession. An investigation by the Seekers of Truth later showed that the Right might have been invoked to cover-up a massacre by Knight-Captain Nicolas, who confessed to murdering over a hundred mages.[5] In retaliation, the Crows were hired to kill the highest members of the Antivan Templar Order. The assassins infiltrated the Circle and infused lemon cake with Maferath's Embrace, a toxin that increases the victim's blood pressure until veins and organs rupture, killing the Knight-Commander and his Knight-Captains. The assassination earned the moniker 'Just Desserts' because the poison was administered through cake.[2]

The Crows and Queen Madrigal[]

One of the Crows' most infamous assassinations was that of Queen Madrigal in 5:99 Exalted. The Queen failed to return from a hunt and was later found with four swords through her body. One of these swords was a replica of Hessarian's Blade of Mercy. Captain Aristide was charged with investigating the murder. After several Crows died under torture, he came to realize that no amount of pain would break the Crows. The guild's notorious reputation was well earned.[6] The violence of the incident haunted the dreams of Divine Theodosia I, thus inspiring her to declare the Steel Age.

Prince Estefan was known for his many bastard children. He was known for bedding high-born married women, using sheets to sneak in and out of their bedroom windows. One night, when he was visiting a beautiful married woman named Marcella, he found a Crow waiting for him. The Prince was strangled in bedsheets, his neck snapped. The public version of the story painted the death as accidental. Prince Estefan's mistress was killed by an adder hidden among her clothes.[2]

In the Exalted Age, an Antivan Crow named Calien who was an Apostate Blood Mage, spent the Fourth Blight aiding the Grey Wardens after the fall of Antiva City. He was instrumental in breaking the siege of Hossberg and participated in the Battle of Ayesleigh where the Archdemon Andoral was slain.

Arl Rendon Howe hires Zevran Arainai to assassinate the Warden, Alistair and their allies as they are the political enemies of Regent Loghain Mac Tir.

After Zevran's assassination attempt fails and his supporters are killed, the Warden may kill Zevran, recruit him or let him live and send him away. If Zevran joins the Warden, his former comrade Taliesen confronts them in Denerim and offers Zevran the chance to return to the Crows by concealing his initial failure to kill the Warden. If Zevran's approval is high enough, he rejects Taliesen's offer and kills him to protect the Warden. If not, Zevran turns against the Warden and is killed fighting alongside his fellow Crow.

The Warden may also choose to work for the Crows, through quests given by Master Ignacio. He reveals that the Crows originally believed Loghain to be Ferelden's best hope against the Darkspawn and hoped to eliminate Loghain's political opponents so he could unify Ferelden and lead the defense against the Blight. However, the Warden's successes convinced them they were an acceptable alternative, eroding Loghain's support while furthering their own agenda.

Conspirators led by Bann Esmerelle hire members of the Antivan Crows to kill the The Warden-Commander of Ferelden, but they are slain in the ensuing confrontation.

If Vigilance was forged:
The master smith of Denerim, Wade, forged the legendary blade Vigilance from the bones of an ancient dragon for Ferelden's Warden-Commander. The blade was eventually stolen by the Antivan Crows, who subsequently lost the blade as well.

If Zevran survives the events of the Fifth Blight:
Hawke meets with a disguised member of the Crows, Nuncio. Nuncio claims to be a lawman from Antiva and asks Hawke to track down Zevran as a murderer. Upon finding him, the truth is revealed and Hawke learns that the Crows are being torn apart from within by the elf, who seeks to seize leadership.

The Antivan Crows also attempt to assassinate Hawke during an ambush in Hightown after being hired by either the Cavril family or Friedrich's surviving family. However, the Crows' assassination is foiled by Tallis.

The plot follows BioWare's own canon, meaning that Alistair is king of Ferelden in the comic's story.
In 9:38, King Alistair, Isabela and Varric Tethras break into the Archive of the Crows and Velabanchel, where King Maric was held captive for years until he was released by Yavana, a Witch of the Wilds. Prince Claudio Valisti, Third Talon of the Crows, attempts to capture Alistair under the orders of Tevinter Magister Aurelian Titus, but Varric and Isabela foil his plans, killing Claudio and his troops.

In recent years, several high-ranking members of the Antivan Crows have been assassinated, without contracts for their deaths. Some claim these deaths are the results of a single operator whom they call 'The Black Shadow.'

If Zevran survived:
Several senior Antivan Crows speculated that Zevran Aranai is likely the Black Shadow causing chaos and dissent within their ranks.

The Crows offer the Inquisitor help in their investigation of Lord Enzo of Rialto, suspected of helping the Venatori smuggle red lyrium into Antiva.

The plot follows BioWare's own canon, meaning it may not follow some of the player's choices in the games.
Andarateia Cantori and Viago De Riva[2] are in Ventus just before the Qunari invasion. They ally with Calix and Olivia Pryde to retrieve a ledger from the Ventus Vaults. After retrieving the ledger, they kill Florian Invidus when he attacks them for working with Calix and Olivia.

The plot follows BioWare's own canon, meaning it may not follow some of the player's choices in the games.
The Wigmaker Job

Lucanis Dellamorte and his cousin Illario take an anonymous contract to assassinate Ambrose Forfex, Tevinter's premiere wigmaker and a Venatori blood mage. During one of his periwig shows in Vyrantium, they discover that he feeds his slaves red lyrium to create red-lyrium infused wigs. When Lucanis destroys the elven artifact strengthening the Veil, chaos erupts at the party. The slave models become possessed by demons, as do some of the drunkest and most frightened guests. While Illario gets the other slaves out of the mansion, Lucanis kills Forfex, who's turned into an arachnid-like abomination. As approximately forty of Forfex's guests are killed at the party, Lucanis becomes known as 'The Demon.'

Lessef accepts a contract from Dalish clan Oranavra to eliminate four members of a Tevinter centuri who murdered a group of elven children from their clan.

Eight Little Talons Caterina Dellamorte, First Talon of the Crows, calls for an extraordinary meeting of all Eight Talons to discuss ways to defend against the potential Qunari invasion. At their retreat, several Talons are murdered in quick succession: Lera Valisti, Giuli Arainai, and Dante Balazar. After Andarateia Cantori foils an assassination attempt on Viago De Riva, they expose Emil Kortez as the murderer. He reveals that the Qunari approached him to eliminate the other Talons as a prelude to peaceful invasion, believing them when they said Antiva wouldn't be forced to submit to the Qun. The four remaining Talons, Caterina, Viago, Teia, and Bolivar Nero, kill Kortez for his betrayal.

The Antivan Crows are compartmentalized into family houses, in imitation of the great noble families of Thedas, with each member of that house, from its leader to its rank and file assassins taking the house's name as their family name. The leadership of the Guild as a whole lies with the Eight Talons, and their respective houses, while lesser houses are referred to as cuchillos (knives). Houses frequently rise and fall in rank.

This section contains spoilers for:
Dragon Age: Origins.
If Zevran Arainai is romanced in Dragon Age: Origins and the Warden sacrifices themself against the Archdemon:
The epilogue will state that he eventually travels to Antiva in his grief and assumes leadership of the Crows. In this case Zevran may be a Guildmaster, or master.

The Crows usually employ elves because humans often find them attractive, giving them an advantage over their target. However, they also have a large number of human recruits. They train their recruits from a young age, and have no problem killing them if they make a mistake. It seems to be an effective method, though they would have everyone believe it takes some special skill to do what they do.

The Antivan Crows often buy orphaned or enslaved elves and humans when they are children and force them to live together in tight quarters. The only way they can survive the brutal process and prove themselves worthy is by surviving every test the Crows throw at them, including killing their peers.

Antivan Crows who achieve the rank of Talon are given a ceremonial dagger from the Guildmaster and sent to assassinate a target using that dagger alone. The greater the risk, the greater the good omen for the Talon's future.

Gift of the Talons

Archive of the Crows 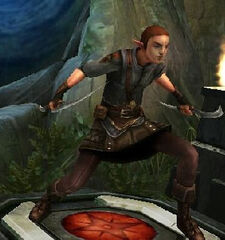 A Crow assassin in Heroes of Dragon Age 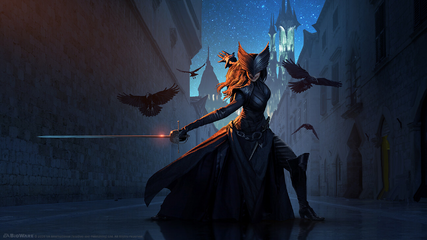 Concept art of an Antivan Crow