watch 02:39
The Loop (Games)
Do you like this video?
“We have been given the gift of freedom by our forbearers. Let us not squander it.”

Anora Theirin (née Mac Tir) is the wife of King Cailan Theirin and daughter of Loghain Mac Tir. She is the Queen of Ferelden, a consummate ruler and committed to ensuring economic security for Ferelden.

Anora was born to the Teyrn of Gwaren and his wife, a former cabinetmaker named Celia. Her father started taking her to court with him in 9:10 Dragon, as he was spending half the year away from Gwaren.[3] There she met and was betrothed to the young Prince Cailan. As a child, Anora began to display many characteristics which did not fade in adulthood: she was imperious and domineering, refusing to play with other children and leading her betrothed around like a puppy on a leash. Yet she also exhibited charm, intelligence and a fierce sense of independence. Her youth was also marked by significant rebellion, as illustrated by the West Hills incident, which involved Anora and Cailan running off to the West Hills arling in 9:23 Dragon to help a freeholder rid his lands of giants.[4]

Anora eventually married Prince Cailan and though the two were fast friends, the marriage was initially one of convenience rather than true love. Though that friendship eventually blossomed into love, Anora always viewed her husband as a fool, lovable and charming, but a fool nonetheless. Upon Cailan's accession, Anora assumed most of the monarchical duties her husband shirked; though she did not rule in her own name, there was no doubt who really ruled Ferelden. Despite five years of marriage, Anora and Cailan did not have any children, leading to rumors that she is barren.

Anora's strongest bond is with her father, whom she views as a role model and who knows her better than anybody in the world. Indeed, one reason why Anora finds so many unimpressive is that they inevitably fail to live up the exceptional standard she holds: that of her father.

Anora is deeply saddened by the demise of her husband at the Battle of Ostagar, though she stands beside her father as he proclaims himself regent. She continues to perform the duties of a ruler, seeing to the day to day administration of the realm, though for the first time cracks began to emerge between her and her father. Anora eventually confronts Loghain, strongly suspecting that it was in fact he that had been responsible for Cailan's death.

Soon after the Warden and Arl Eamon of Redcliffe's arrival in Denerim, Arl Rendon Howe, Loghain's closest lieutenant, accuses Anora of treason and imprisons her in his estate. Anora dispatches her servant Erlina in secret to meet with Arl Eamon and the Warden; and also to ask for their help. The Warden storms Howe's estate and rescues Anora, but they were stopped by Ser Cauthrien and a contingent of Loghain's guards. If the Warden reveals their intention to rescue Anora, she will deny it and accuse the Warden of kidnapping her. Anora would later justify her ruse to the Warden by explaining she was trying to discreetly evade confinement by her father's henchmen and they threatened to draw her unwanted attention by announcing her to Loghain's most trusted lackey. Ultimately the Warden is either captured by Cauthrien and has to be rescued/escape from the prison of Fort Drakon or fights their way out of Howe's estate. In the meanwhile, Anora flees to Arl Eamon's estate and begins to actively work against her father following her rescue. Anora was the first to suggest that the Warden should investigate the Elven Alienage in Denerim, as she has suspicions that Loghain may be behind the unrest there.

Anora attempts to sway the Warden to support her claim to the Ferelden throne, arguing they would look to the public as supporting Ferelden's best interests rather than solely the Grey Wardens. Furthermore, despite Alistair's Theirin blood, Anora also fears Alistair will make a poor ruler − just like his brother Cailan.

If the Warden talked to Anora before the Landsmeet, promised to support her claim for the throne and didn't insist that Loghain must pay for his crimes, she speaks in favor of the Grey Wardens. If the Warden earned Anora's support, Anora paints Loghain as a villain in front of the Landsmeet and paints the Warden as her rescuer from Howe's dungeons. Otherwise she will speak against them, claiming they are slandering Loghain and she also accuses Alistair of being an impostor and an usurper. She will also chastise the Warden for refusing to cooperate with her and accuses them of being the true threat to Ferelden.

Ultimately, the Warden wins the Landsmeet. If Loghain is not executed for his crimes, Riordan will propose that Loghain make amends by becoming a Grey Warden. Anora supports her father's redemption and tries to persuade the Warden to admit Loghain into the Grey Warden order by arguing he will either be a valuable asset as a renowned general, or die from the Joining.

If Anora is made queen:
Prior to the Landsmeet, Anora negotiates an agreement with the Warden: the Warden would support her bid for the throne and in return she would rally the nobility against her father. Both fulfill their end of the bargain, though Anora strongly protests the proposed execution of her father following her downfall. Nevertheless, the nobility proclaim her queen, her first act being to appoint the Warden as commander of the Ferelden Coalition. She is present at the Battle of Denerim, rallying her troops before they attack the darkspawn.

Following the defeat of Urthemiel, Anora is crowned by Grand Cleric Elemena. She proclaims the Warden Hero of Ferelden and strips the Howe family of Amaranthine, granting it to the Grey Wardens. She goes on to refill Ferelden's empty coffers with new trade deals and establishes a university.

If Anora marries Alistair:
Prior to the Landsmeet, Anora enters negotiations with the Warden. It is agreed that the Warden would support Anora's bid for the throne on the condition that she would marry Alistair. Anora is hugely uncomfortable with this suggestion, but reluctantly agrees to it, adding the caveat that the two would marry and rule on equal terms - there would be no repeat of Cailan's reign.

The accession and betrothal of Anora and Alistair was formally recognized by the Landsmeet, with the couple being crowned and married following the defeat of Urthemiel. Though the marriage was not a happy one for either party, the pair prove popular with the people.

If Anora marries the (male Human Noble) Warden:
Prior to the Landsmeet, Anora enters negotiations with the Warden. Anora agrees to rally the nobility against her father in return for the Warden's support in her bid for the throne. The Warden, however, agreed to support her only if she would marry him following the end of the Blight. This proposal surprises Anora, though she eventually agrees. She was proclaimed queen by the Landsmeet, where she announces her engagement to the Warden and also appoints him commander of the Ferelden Coalition. She is present at the Battle of Denerim, rallying her troops before they attacked the darkspawn.

Following the defeat of Urthemiel, Anora was crowned by Grand Cleric Elemena. She proclaims her husband-to-be Hero of Ferelden and Prince-Consort, marrying him six months following her coronation. Many declared that if the two did not end up vying for control of the throne, they would usher in a golden age for Ferelden.

If Anora is deposed:
Despite her efforts to win the throne, Alistair is proclaimed king before the Landsmeet. However Anora refuses to recognize Alistair as her king. Some see her as a threat and call for her execution, but Alistair shows clemency and imprisons her instead.

Despite her downfall, she remains as the heir of King Alistair if he should perish from the Blight. If Alistair makes the ultimate sacrifice while slaying the Archdemon, she becomes the new Queen of Ferelden and she recognizes Alistair as the last person of the Theirin bloodline.

If Anora is the queen:
Anora arrives at Vigil's Keep with a regiment of troops and the templar, Rylock, to inspect the newly established Warden stronghold in Amaranthine. She wishes the Warden-Commander luck, charging them with the rebuilding of Vigil's Keep and the restoration and administration of Amaranthine. She also approves the conscription of the apostate, Anders, into the Wardens' ranks, despite Rylock's protestations.

If Anora is the queen:

Queen Anora offers to reinstate the commission of any Fereldan officer who fled in the Fifth Blight if they will return home and rejoin the army. This prompts veterans such as Aveline Vallen to consider returning to Ferelden.

If Anora is Queen alone or alongside King Alistair:
Anora allows the rebel mages to take refuge in Redcliffe Castle. However after the rebel mages are aggressively taken over by the Tevinter Magister Gereon Alexius, Alexius begins to have rebel mages displace the people of Redcliffe.

If the Inquisitor recruits the Mages:
Having enough of the mages' abuse, Anora (alongside King Alistair if they rule jointly), arrives in Redcliffe with a contingent of soldiers shortly after the Inquisition's ousting of Alexius to inform the rebel mages that they have outstayed their welcome and recommends that they take whatever deal that the Herald offers, informing them that they will leave Ferelden no matter what.

If Anora is Queen alone:
Seeing the Inquisition's rising influence, Anora reaches out to the Inquistor to request aid in uprooting Venatori cultists in the Royal Palace at Denerim, hoping to avert a repeat of what happened at Redcliffe. With the aid of the Inquisition's agents, four Tevinter spies and a possible plot to assassinate the queen are discovered. Once the Orlesian Civil War is resolved with the help of the Inquisition, Anora writes for a second time to ask that they help facilitate peace talks in Jader between Ferelden and Orlais. The Inquisition sends Josephine Montilyet to moderate peace talks, and, despite years of bad blood between the two nations, the talks go smoothly thanks to Anora's skills as a diplomat and Orlais' desire to avoid further wars. In thanks, she sends the Inquisition a sword that once belonged to King Calenhad. 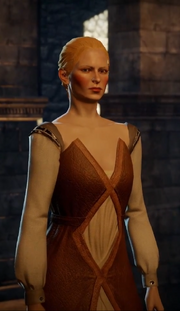 Retrieved from "https://dragonage.fandom.com/wiki/Anora?oldid=888033"
Community content is available under CC-BY-SA unless otherwise noted.