Andruil the Huntress, also known as the Lady of Fortune, is the elven goddess of the hunt. To the Dalish, she represents their very survival.[3]

I am Sister of the Moon, Mother of Hares,
Lady of the Hunt: Andruil.
Remember the Ways of the Hunter
And I shall be with you.[4]

Some legends paint Andruil as a daughter of Elgar'nan and Mythal while others suggest she is a child of the earth.[5] In either case Sylaise is known as her sister.

Andruil is the creator of the Vir Tanadhal or Way of Three Trees. First, the Vir Assan, or Way of the Arrow: fly straight and do not waver. Second, the Vir Bor'assan, or Way of the Bow: bend but never break. Third, the Vir Adahlen, or Way of the Forest: receive the gifts of the hunt with mindfulness,[4][6][7] or alternatively, together we are stronger than the one[5][8] Andruil watched over the animals of the forest and taught elves to respect them.[9][10]

Ghilan'nain, once a mortal elven woman, was Andruil's chosen[11][12] and/or beloved.[5] There is a number of different stories involving her betrayal at the hands of an elven hunter.[5] In the end Andruil transformed her into a halla[11], and Ghilan'nain rose to a godly rank.[12]

In one Dalish legend Dirthamen gave a secret to each creature to keep, and the foxes traded theirs to Andruil for wings.[13]

In the story told by Felassan Andruil confronted Anaris, one of the Forgotten Ones over the right to punish Fen'Harel, but he outwitted both and managed to escape.[14]

Andruil was indeed the hunter. She made great and terrible weapons: a golden bow crafted from the gathering storm and the screams of the south wind[1][15] and a golden spear of unbearable heat crafted from the radiance of stars.[2][16]

One of the People, Ghilan'nain created a multitude of beasts, and Andruil was killing them for a year before approaching her with an offer of apotheosis. In exchange Ghilan'nain destroyed most of them, sparing only some "monsters of air" that she presented to Andruil as a gift, some deep sea creatures and the halla.[17]

Andruil also hunted mortals in addition to animals[18] and was known as the Goddess of Sacrifice.[19] Her followers implored her not to make them Her prey and sacrifice.[2]

The love for challenging hunts even made Andruil stalk the Forgotten Ones in the Abyss, something that ultimately drove her mad. Andruil put on armor made of the Void and made weapons of darkness. She brought plague to her lands and howled things meant to be forgotten. Finally Mythal successfully challenged her and stole her knowledge of how to find the Void.[18]

Veilfire symbols in the Exalted Plains show a hawk and a hare chasing the sun,[21] while in an ancient riddle the owl sees the hunter, the halla flees from it, the dragon hunts it in turn, while the wolf outwits them all.[22]

The constellation Fervanis, commonly referred to as "the Oak," might be a representation of Andruil and the Vir Tanadhal.[23]

La Maison Verte in the Dales was built around the ruins of a sanctuary dedicated to Andruil. The heart of the shrine was an etched stone altar.[24]

She took the gathering storm, trapped its fury in golden limbs, and strung it with the screams of the south wind. Andruil, blood and force, your people pray to you. Grant that your eye may not fall upon us. Spare us the moment we become Your prey.[1]

She shook the radiance of the stars, divided them into grains of light, then stored them in a shaft of gold. Andruil, blood and force, save us from the time this weapon is thrown. Your people pray to You. Spare us the moment we become Your sacrifice.[2] 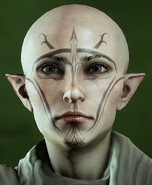 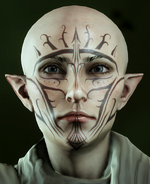 Retrieved from "https://dragonage.fandom.com/wiki/Andruil?oldid=869841"
Community content is available under CC-BY-SA unless otherwise noted.