Andrastianism is the dominant religious belief in Thedas. It is based on the Chant of Light, a series of teachings written by Andraste, the prophet of the Maker, and her disciples. Many different religious groups interpret these teachings differently, the largest of which is the Chantry. There are two main branches of the Chantry: the Orlesian Chantry, based in Val Royeaux and dominant in every human nation save Tevinter, and the Imperial Chantry, based in Minrathous and dominant in the Tevinter Imperium. Followers of either branch refer to themselves as Andrastians.[1]

The Chantry originated as one of the many cults emerging upon the legend of Andraste’s martyrdom.[3] Known as the Cult of the Maker, it was without central leadership[4] and its followers were oppressed.[5] The clerics had to hide their lore from Tevinter magisters by way of ciphers and encoded scrolls.[6] In -130 Ancient, cult practitioners organized Andraste's teachings into hymns, creating the Chant of Light, leading to their spread in popularity.[7]

There were various cults of the Maker until Kordillus Drakon, who would become the first emperor of Orlais, unified them by the sword and formalized them into the Chantry in -3 Ancient.[8] Drakon established Andrastianism as the national religion. The first Divine, Justinia I, was declared four years later. Though her appointment caused significant frustration in Tevinter, which had been organizing Andrastianism on their own for over a century, they initially attempted to appease the newly created Orlesian Chantry by transferring authority over the faith from the Archon to the grand clerics.

Drakon's military successes during the Second Blight significantly expanded the borders of Orlais, and soon after, the conquered lands converted to the faith. While these lands would later liberate themselves from Orlesian rule following Drakon's death, Andrastianism remained.

The Nevarran Accord signed in 1:20 Divine brought the Inquisition and the newly created Circles of Magi under the Chantry's authority. The Inquisition divided into two new orders: the Templar Order, charged with looking over the Circle and hunting apostates and maleficars, and the Seekers of Truth, overseers of the templars and special agents of the Divine.

By 1:45 Divine, the teachings of Andraste had been popularized in Antiva. The Antivan Crows started as an arm of the Chantry. In the hills north of Treviso, an order of monks used the herbs grown in the gardens of their abbey to oppose the rule of a despotic duke in the only manner the monks could.[9]

Tensions between the Tevinter and Orlesian Chantries came to a head during the Towers Age over disagreements on the meaning of the commandment that "magic exists to serve man, and never to rule over him." In Tevinter, where magic had long been a valued trait, prized and nurtured through selective breeding in the upper classes,[10] the clerics preached that magic must serve the greater good and not be used to control the minds of others, which they believed was best accomplished by allowing mages to take part in government. When the Orlesian Chantry finally learned of this in 3:87 Towers, Divine Joyous II demanded they revert to the Orlesian version of the Chant. Tevinter refused, claiming corruption within Val Royeaux. Divine Joyous II declared them all heretics, leading the Archon to appoint Grand Cleric Valhail, a man and a mage of the Circle, to the position of Imperial Divine.[11][12]

With so much influence over the people, the Chantry can exert considerable political pressure on the ruling classes in many areas of concern. In extraordinary times, and in deference to Andraste, the Divine may also be moved to declare an Exalted March. These religious crusades have mobilized armies of thousands to destroy the heretical enemies of the Maker. The first March after Andraste's death was against the elves of the Dales, which led to Divine Renata I's decree to create Alienages as well as to destroy any Chantry art and references to elves, save a single original mural of Shartan with his ears cropped. A faithful copy exists at the University of Orlais.[13] The next five were against Tevinter, and the most recent were against the Qunari, with the support of the Imperial Chantry.

The fundamental belief of the Chantry is that the Chant of Light must be spread to all four corners of the world and to all races, as only when all peoples have accepted the Chant and practice its teachings will the Maker return and restore the world to its former glory. As such, the Chantry in Thedas can be described as deistic in that the Maker abandoned the world, and he will not heed prayer or perform any other function until His favor is regained.

Members of the Chantry often worship in buildings called chantries. These chantries are present in almost every village, town and city and some will also maintain a Chanter's Board, where members of the community can put up requests for aid. Chantries also deliver practical services to the community, caring for the sick and collecting alms for the poor. The Chantry provides hospitality to travelers and a public network of communications. Should an illiterate commoner need to send word to another town, the Chantry's educated priests write and send the letter for him. Revered mothers are also able to officiate wedding ceremonies and legalize marriages.

As the larger of the two denominations of the Chantry, the beliefs of the Orlesian Chantry can be found throughout Thedas. It is the dominant religion in Ferelden, Nevarra, Orlais, Antiva, the Free Marches, the Anderfels, and has a notable following in Rivain.[14] While some of the nations vary in their specific practices, such as how Nevarra practices different funerary rites, they share some core beliefs, unlike the Imperial Chantry.

First, they hold a core belief that magic is a corrupting influence that must be regulated. This is largely due to their similar belief that ancient magisters were responsible for the destruction of the Golden City and causing the creation of the darkspawn. This is known as humanity's Second Sin, and is often cited as proof of how magic gives rise to the desire for power and glory at any cost. Due to these beliefs on the dangers of magic, the Orlesian Chantry has direct control over the Circle of Magi as well as the Templar Order and the Seekers of Truth. They also strictly control the supply of lyrium, which they provide to the Circle for the crafting of enchantments or the use in Harrowing of apprentices, as well as to the templars who use it to develop their anti-magical abilities.

Pointing to Maferath's betrayal as an example, they also believe that men are unsuited to leadership positions on spiritual matters. As a result, men are barred from reaching stations above that of Brother.

The Imperial Chantry broke away from the Chantry of Orlais in 3:87 Towers over their differing interpretations of Andraste and her teachings, especially regarding magic. As a result, it has a much smaller prevalance in Thedas, being the dominant religion only in Tevinter, as well as a minor presence in Seheron.[15] They intrepret the Chant's message of "magic exists to serve man, and never to rule over him" to mean that mages must use magic responsibly, and that the rule of the magisters serves the greater good. They also claim that Andraste was herself a mage of great power.[10]

Unlike in the Orlesian Chantry, the upper echelons of the clergy of the Imperial Chantry is open to men and women both. In fact, the Imperial Divine, whom the Tevinters consider the "True Divine," is always male, unlike the "White Divine" of Orlais, who is always female.

In addition, the Imperial Chantry denies the Orlesian belief of the Second Sin, instead claiming that they are merely tales, that darkspawn have always existed, and that Magisters and the Blight are not related at all.[16][17]

The Imperial Chantry also does not have direct oversight of the Circles of Magi within Tevinter, which are instead governed by high-ranking Magisters. While the Imperial Chantry has their own Templar Order, they are unaffiliated with the templars of the south and do not consume lyrium to counter magic. As a result, Imperial Templars primarily act as soldiers to enforce the law of the Imperium.[18] There is no equivalent to the Seekers of Truth within the Imperial Chantry.

While the two Andrastian Chantries represent the predominant religion in most of Thedas, they began as one of many Andrastian cults. These alternative interpretations of the Maker and his prophet are considered heretical by both groups, though a few survived the centuries of the expansion of Andrastianism.

The Blades of Hessarian are a secret society that believes they have been chosen to bring Andraste's judgement down on the weak and corrupt. They trace their origin to a Tevinter slave named Trefir, who purportedly received the very sword that killed the prophet from Andraste herself after her death. Ever since they have considered the bearer of the sword to be her instrument and their leader.

The Daughters of Song, which despite the name included men though they called themselves "daughters" as well, were a hedonistic cult that venerated the "union" of Andraste and the Maker before every other consideration. The cult was centered on the village of Virelay in the Fields of Ghislain. They refused to arm themselves when Kordillus Drakon's armies razed Virelay and captured or killed most of the cult.

When Andraste was burned in Minrathous, a group of her disciples gathered her ashes and took them deep into the Frostback Mountains of her native Ferelden, where they founded Haven and built the Temple of Sacred Ashes. The Disciples eventually came to believe that Andraste had been reincarnated in the form of a High dragon and became a dragon cult.

The Empty Ones were a short-lived apocalyptic cult based in Nevarra. They believed that Andraste's death heralded the end of the world as the Maker's wrath would soon destroy it for her betrayal. They came to believe the Blight was the Maker's chosen instrument in this and sought out darkspawn to aid them in bringing the Blight. The entire cult was predictably killed after marching into the path of the darkspawn horde during the Second Blight.

Originating in the chaotic time of the first Inquisition, the Order of Fiery Promise believes the world must be ended in order to be reborn as a paradise. The first Inquisition crushed the "Promisers" in open battle, but they have persisted through the ages and occasionally reemerged to challenge the Seekers of Truth, whom they see as usurpers.

The Winterwatch Tower cultists worship the Breach, as they believe it was the Maker who caused it in order to open the skies so that His faithful can return to Him in the Golden City. Whilst they still revere Andraste, they defy the Chant of Light as they believe it is false.

The Cult of Masked Andraste is a splinter denomination which worships a hunter aspect of Andraste prominent in western Orlais.[20]

Chantry of the Stilled Tongue[]

Located in Denerim, the Chantry of the Stilled tongue is a "maniac splinter cult" of the Andrastian Chantry with a preemptive perspective on sin. Their practice of removing the tongues of children that may grow up to speak heresies against Andraste and the Maker is how the faction earns its name.[21] 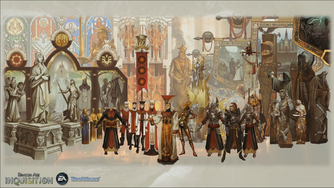 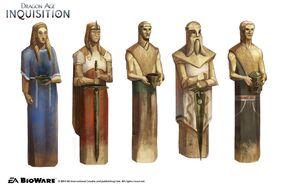 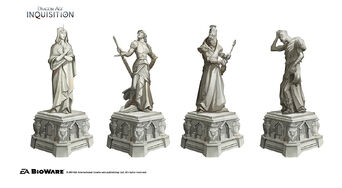 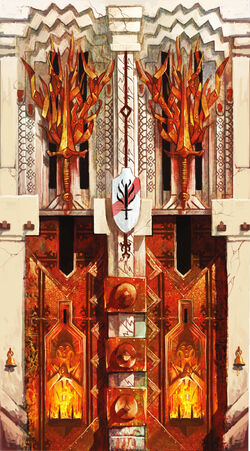 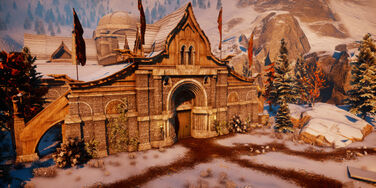 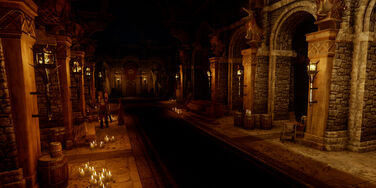 The interior of Haven's new chantry 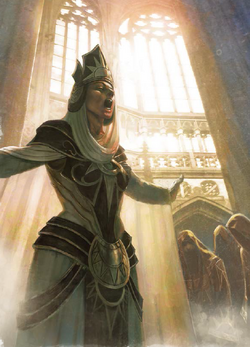 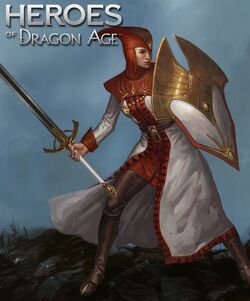