watch 02:45
Wiki Targeted (Games)
Do you like this video?
Play Sound
“Its gates forever shut.
Heaven has been filled with silence,
I knew then,
And cross'd my heart with shame.
—Andraste 1:11”

Andraste is the prophet whose teachings later served as the foundation for the formation of the Chantry, which later becomes the dominant religion of Thedas. She was the spiritual wife of the Maker, the being whom the Chantry worships.

“And thus fell the eye of the Maker upon Andraste, she who would be raised up from outcast to become His bride. From her lips would fall the Chant of Light, at her command would the legions of righteousness fall upon the world.[2]”

Andraste was a woman who rose to greatness, first as a slave of the Tevinter Imperium, then as a prophet, war leader, and religious icon.

According to Chantry scholars, Andraste was born into a prosperous Ciriane-Alamarri tribe in -203 Ancient (992 TE) in Denerim, which was then a fishing village. Her mother was a Ciriane[3] woman named Brona and her father, Elderath, was the chieftain of one of the largest Alamarri tribes in what is now northern Ferelden.[4] She had a half-sister, Halliserre, born of Elderath and his advisor on matters of alchemy. Halliserre died in a violent incident under mysterious circumstances with Andraste present. This incident scarred Andraste in many ways: she was left with a sickness of the lungs that made her unable to bear children for a decade; she also was known to display strange behavior, such as becoming still for long moments in a trance-like state, after which she would report voices as if from a lost memory and talk of strange auras or the sound of bells. Later on, Andraste came to remember her sister's death as a matter of heresy, suggesting that her alchemist mother had been whispering of the Old Gods.[5]

Andraste was married to Maferath to create a unified Alamarri border that stretched from the Planasene through the Fertile Crescent to the Bannorn. It was at the time the largest alliance the barbarians of the South had ever attempted. As Andraste was too weak to bear children[6] when she married Maferath, he sired three sons with the concubine Gilivhan: Isorath, Evrion and Verald. Andraste adopted them as her own. She did manage to eventually give Maferath two children: daughters named Ebris and Vivial.[7] The daughters were never counted as heirs and were not permitted to marry though relationships and families were still allowed. Ebris partnered and had children, but was as weak as her mother, and died of plague in her late twenties. Her daughter, Alli Vemar, was married, but died in an accident before she could have any children. The other daughter of Andraste, Vivial, fell in love with the Tevinter mage named Regulan, which caused great controversy and led them into exile. All records of her and her daughters were destroyed by Andraste herself.[6] It is unknown if any of her descendants still live, as all of her scions were born female, and thus they took their husbands' names in marriage. There have been many claimants in the centuries since, saying that they were related to Andraste, but the Chantry has disavowed each of them. To date there are no known legitimate heirs to Andraste's blood.[8]

After their marriage, Elderath was killed in a Tevinter raid and Andraste kidnapped and enslaved, leaving Maferath in control of all northern Alamarri territory, the largest potential force outside of the Imperium. As most of the men were Elderath's, they would only follow Maferath after he successfully negotiated Andraste's release.[9]

As her people rallied, Andraste began to see herself as a conduit to the truth of the Maker and what He required for the salvation of the people and declared around -180 Ancient the first Exalted March against the Imperium, who still believed in the heretical Old Gods. The First Blight, which had only ended a few years before, had significantly weakened Tevinter: there was widespread civil unrest over the Blight and the silence of the Old Gods and numerous slave uprisings. The droughts, wildfires and landslides, now commonly believed to either have natural explanations or to be the result of darkspawn interference,[9] were then considered miracles performed by Andraste. As a result, Andraste's march was greatly successful.

Andraste also joined forces with the elven leader and former slave Shartan and his people, as they shared a common enemy in the Imperium. Together they fought in the Battle of Valarian Fields in -171 Ancient, one of the biggest victories of the Exalted March. After this battle, Maferath began to believe they had overextended themselves, and were now facing the risk of losing everything they had won, and more. In -170, he conspired with Archon Hessarian and allowed disguised Tevinter forces to enter Andraste's stronghold in the city of Nevarra to capture her and bring her back to Minrathous, where the Archon had her burned at the stake.[6]

Archon Hessarian, who ordered Andraste's execution, later converted to following the Chant of Light. According to the Chant, the Archon saw the error of his ways as soon as Andraste was burned. It was he who put the sword through her heart to put her out of her misery, which is why the sword is a symbol of mercy in Andrastian lore. Later, he repented her execution entirely, though Chantry dissenters claim Hessarian only converted because he could not stem the tide against Andraste's followers, who were only emboldened by the death of their leader, and he repented his actions as a means to stay in power.[10]

Ten years after Andraste's death, he publicly revealed Maferath's betrayal and proclaimed the Imperium an Andrastian nation, though the Chantry as an organization did not yet exist at this time. Maferath and his court were slain when his betrayal became known.

After her death, a group of people named the Disciples of Andraste was created for the purpose of protecting her remains and continuing her legacy. They moved her ashes to the Frostback Mountains and a temple was built around it. Eventually, however, only the Guardian remained at his post and protected the ashes, as the rest of the disciples believed that Andraste had been reborn into the form of a high dragon. This temple commemorates her memory and prevents the unworthy from viewing her remains. The remains stayed in the mountain, undisturbed for many years and eventually rumours began to spread that her ashes held curative properties.

In 9:30 Dragon, during the Fifth Blight, the Warden found Andraste's ashes and brought a pinch back to Arl Eamon, who has been poisoned, restoring him to health.

Vision of the Maker

According to legend, before the Maker spoke to Andraste, she despaired at the fate of her people. At that time, every night, her husband Maferath would come to console her and each time Andraste would tell him of her despair while shedding a single tear, which Maferath captured in a vial. As a barbarian, she was taught to revere the Alamarri gods, the gods of mountains and the wind. When she prayed to them, none answered.[12] On the thirtieth night the vial was full, and when dawn came Andraste saw her first vision of the Maker. Even though this legend is popular and has been passed on for ages, a part of it isn't in the Chant of Light.[13]

From an early age, Andraste suffered troubling dreams of a deity known as the Maker.[4] Over time she began to interpret these dreams as the answer to questions that plagued her, and she came to believe that the Maker was the supreme being who had abandoned the world when his people took up the worship of the Old Gods, those beings worshipped in particular by the Tevinter Imperium. According to Chantry canon, after having fled the Imperium and marrying the warlord Maferath, Andraste appealed to the gods[14] but her prayers went unanswered. She would sing, and one day the Maker, enchanted by her voice, invited her to join Him at His side. She instead encouraged Him to return to humanity and forgive them, compelling her fellow Alamarri and others to accept the one true god of Thedas.

The official belief of the Imperial Chantry is that Andraste wasn't, in fact, the Maker's Chosen, but rather "just" an extraordinarily powerful mage.[15][16] This view, which is considered heretical by the Andrastian Chantry, can also be found in a book called "The Search for the True Prophet". Chantry art frequently depicts her as a warrior bearing a sword and shield or as a robed motherly figure, however.

Furthermore, the newly revealed portions of the formerly-apocryphal Dissonant Verses of the Chant of Light seem only to ascribe more "mundane" visions and periods of immobility to Andraste rather than magical powers, and in fact describe her and her warrior army being nearly bested by the magical attacks of Tevinter during her rebellion.[17] Some individuals, such as Empress Celene, similarly suspect that Andraste's views were likely more political than idealistic.[18]

At the beginning of Matrinalis, there is a holiday named "All Soul’s Day", and the Chantry uses the holiday to commemorate the death of Andraste, with public fires that mark her immolation and plays that depict her death. In Chantries across Thedas, it is more popular to depict Andraste praying rather than as the conqueror with a sword and shield.

The Coming of Andraste's Herald

In 9:41 Dragon the peace conclave held at the Temple of Sacred Ashes to put an end to the Mage-Templar War was suddenly destroyed in a massive magical explosion, killing Divine Justinia V, destroying the Temple and leaving a massive Breach into the Fade. The sole survivor of the explosion was seen being led out of the Fade by an unknown woman.

The survivor was suffering from memory loss, and couldn't explain their miraculous survival. On their left hand was a strange mark with the ability to close Fade rifts across Thedas. After stabilizing the Breach, many came to believe that the woman in the Fade had been Andraste herself, who had chosen the survivor to save Thedas. Thus, those believers came to call the survivor the "Herald of Andraste".

During the Inquisitor's push to halt the chaos at Adamant Fortress, they were physically thrown into the Fade once again. It is revealed that the woman who led the Inquisitor out of the Fade was not Andraste but Divine Justinia V, who had been sent into the Fade along with the Inquisitor and sacrificed herself to save them from a pack of demons.

Andraste as war leader against the Imperium.

Andraste's ascension and the weakened Imperium. 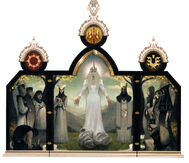 A Fereldan statue depicting Andraste as a warrior. 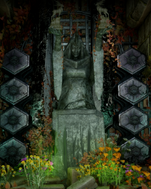 Shrine dedicated to both Andraste and Ghilan'nain

Retrieved from "https://dragonage.fandom.com/wiki/Andraste?oldid=813600"
Community content is available under CC-BY-SA unless otherwise noted.