Andoral, the Dragon of Slaves, was one of the Old Gods, ancient draconic beings said to be imprisoned underground by the Maker for usurping His worshipers.[1] He is also sometimes referred to as the Old God of Unity.[2]

Andoral was the fourth Old God to be corrupted by the darkspawn, incurring the Fourth Blight upon Thedas.

Like the other Old Gods, Andoral endorsed the ancient Tevinter Magisters attempt to reach the Golden City and spoke to the High Priest of Andoral, who used the alias, "The Appraiser of Slavery" and told them to join in the endeavour. [3]

There was a holiday in Tevinter Imperium dedicated to Andoral back in the times when the Old Gods were still widely revered. It was called "Andoralis" but this holiday is now known as Summerday and is celebrated as the beginning of summer, a time for joy and, commonly, marriage. It is celebrated at the beginning of Molioris. The ancient Tevinter associated the constellation "Servani", depicted as a man in chains, with him.

Andoral was awakened in 5:12 Exalted by the darkspawn and rose as an Archdemon to lead the Fourth Blight, completely overwhelming Antiva and laying siege to the capital of the Anderfels. Andoral attacked the Grey Wardens as they withdrew from Antiva City, killing Warden-Commander Turab and the entire Antivan royal family.

In the Battle of Ayesleigh, in 5:24 Exalted, a combined army from Orlais, the Anderfels, and the Free Marches under the banner of the Grey Wardens defeated Andoral's horde while the Archdemon was slain by the elven hero Garahel. 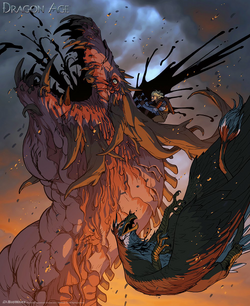