watch 02:39
The Loop (Games)
Do you like this video?
“The Lady of the Skies led me to your Herald. What is Andraste the goddess of anyway?”

Amund is a large burly Avvar man who guards the entry to the Avvar stronghold in the Fallow Mire. Amund is a Sky Watcher, a title bestowed to a shaman of the Lady of the Skies.

Amund is also a playable character in the Dragon Age: Inquisition Multiplayer.

Amund is a Skywatcher, an Avvar priest of the Lady of the Skies, tasked with reading her portents and rendering up the bones of the dead as offerings. When the sky tore open at Haven, he knew the lady had spoken. Now he follows the strange lowlanders of the Inquisition on his quest to carry out her will. He may not be entirely sure what they're doing, but he's certain he will find out what the lady wants of him along the way.

Note: Skipping the rift and going straight to the Avvar stronghold will result in him not being present after rescuing the Inquisition soldiers. In order to recruit him, you will need to close the rift he is originally present at (he will not be there) and then return to the entrance to the Avvar stronghold.
During the Inquisition's expedition to the Frostback Basin, Sky Watcher expresses interest in visiting Stone-Bear Hold in a war table operation. In both outcomes he is warmly welcomed in the hold and is reported to have had sex with Thane Svarah Sun-Hair.

Amund, the Skywatcher is an elemental two-handed warrior. Amund's ability, Korth’s Might, may be charged with different elements. The element used is determined by the elemental affinity of the ability most recently used. For example, using Hakkon's Charge will energize Korth’s Might with ice while Lady's Wrath will energize it with lightning.

Note: There is a bug in the programming where the model for Amund is human-sized in Multiplayer, despite having the hitbox of the much larger model you encounter in the story. Thus he tends to get stuck more often than other characters.

For the main article, see Amund/Dialogue. 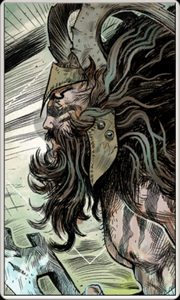 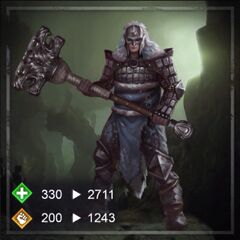 Retrieved from "https://dragonage.fandom.com/wiki/Amund?oldid=891070"
Community content is available under CC-BY-SA unless otherwise noted.