The Allied Supply Crates, located in the Party Camp, allow the Warden to invest resources in the equipment of the allied army that will eventually battle the Blight.

If the Warden has the appropriate items in their inventory, interacting with the crates allows those items to be deposited via a dialogue-like menu. Each faction that is won over to aid the Grey Wardens against the Blight will send an emissary to stand near the supply crates; The Warden may speak with them briefly and gain hints about the type of material each requires.

Investing resources into the various factions (where applicable) should apparently result in improved equipment and abilities for allied troops, but the mechanics and actual effects of this system are unclear. Even though numbers and upgrades from donations are unclear, with enough donations emissaries will say different lines depending on how much you donate. For example, the mage emissary will say something like "Such power has not been seen since..." and after more donations of runes he will say "Even the templars will be amazed...". Whether or not this is just a morale booster for the player to donate more or actually indication of more power is unknown.

The experience reward for the Warden is noted below. The companions do not directly gain experience from this, though they may still benefit indirectly as the Warden gains levels. 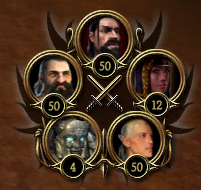 The interface showing available troops during the final battle. In counter-clockwise order starting with the top: 50 humans, 50 dwarves, 4 golems, 50 elves, and 12 mages. 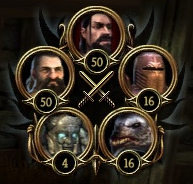 The interface in this picture shows 16 werewolves instead of 50 elves and 16 templars instead of 12 mages.
Add a photo to this gallery
Retrieved from "https://dragonage.fandom.com/wiki/Allied_Supply_Crates?oldid=808908"
Community content is available under CC-BY-SA unless otherwise noted.