All That Remains is a main plot quest in Dragon Age II during Act 2 revolving around the disappearance of Hawke's mother, Leandra.

You can optionally report Leandra's disappearance to Moira in the Gallows, though doing so has no lasting effect.

There are two ways to get access to the Dark Foundry depending on whether Gascard is alive or not:

If Gascard still lives and you have performed the blood magic ritual to track down the location of the killer, Gascard reveals his ulterior motives and will betray you and take the side of the killer in the upcoming battle unless you are a diplomatic or aggressive Hawke, in which case you can talk him into helping you or intimidate him into assisting you.

When you arrive at the foundry, follow the blood trail to a trapdoor. As you battle through the area you will come across notes that begin to paint a picture of what's happening. This picture begins to become clear after the battle in the living quarters. At the end of the next hallway, a cut scene plays where you confront the killer. During the fight, the killer will summon swarms of abominations plus three possessed women in the form of desire demons, which you must destroy in order for him to lower the shield he generates around himself.

If Gascard DuPuis is with you in the killer's lair for the meeting with Quentin, there are three possible outcomes:

Unlocks Following the Qun and The Captain's Condolences companion quests. 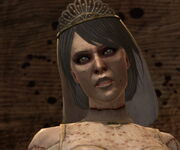 Close-up of Leandra dying in Hawke's arms
Add a photo to this gallery
Retrieved from "https://dragonage.fandom.com/wiki/All_That_Remains?oldid=411031"
Community content is available under CC-BY-SA unless otherwise noted.
FandomShop DC Trivia GalaxyQuest